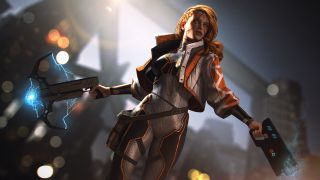 Games2Gether is a community development platform created by Amplitude Studios for its Endless series. It's used for everything from tracking a game's development to unlocking freebies, and Amplitude's used it to build a community around its strategy series and their spin-offs. It's something publisher Sega hopes to see built on, potentially with other studios.

"They've obviously engaged with their community from very early days via that platform," Anna Downing, vice president of marketing, told us at E3. "So absolutely, that's something they will continue to use in the future. And I think for us at Sega, as well, when you work with all the different studios, and you have something like the Games2Gether platform, you start thinking about opportunities with other studios, or how we can collaborate."

It could potentially become part of Sega's wider publishing strategy, Downing added, and while it's solely owned by Amplitude, Sega is working with the studio to keep developing the platform. It was one of the reasons Sega wanted to work with Amplitude in the first place.

"Games2Gether was a real innovation, something that stood out from what other developers were doing, and we thought there was real value to that," said John Clark, executive vice president of publishing. "When we work with studios, we want to use the innovation of the studios to drive our own core business, as well. So it's important that studios such as Amplitude keep building that innovation."

Sega's studios include Creative Assembly, Relic Entertainment and the various teams at Atlus, but the publisher hasn't indicated what games could get the Games2Gether treatment.