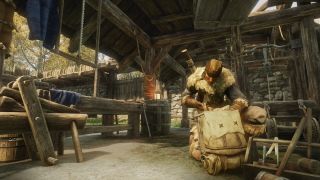 Amazon Game Studio’s MMO, New World, is being drip-fed to us through lots of lovely screenshots on Twitter. Last month, we got a look at two new areas, Brightwood and Weaver’s Fen, and the account has continued to tease more of the game since. Lately, it’s been showing off moody fantasy locations and crafting activities.

Check out this self-sufficient fella.

Blacksmiths are required if you want to arm a legion of players and get them ready to steal land from their enemies, or, like this guy, you can just make a suit of armour for yourself.

He looks overjoyed with his handiwork.

Builders will be in demand, too. Someone has to put together all these forts for armies to besiege. Here’s one hard at work.

Unfortunately, all that effort can be undone by a powder keg, as Samuel discovered when he got some hands-on time with New World and blew a hole in someone’s wall. Very rude.

And speaking of blowing holes in walls, that’s something an engineer can help with. You can see one below doing exactly that.

Excuse me, but someone spent a lot of time on that.

It’s very focused on war, but you can also spend a lovely evening picking flowers.

Oh, sorry, I’m mistaken. According to the developers, he’s actually looking for ingredients for tinctures and potions that will give armies an edge in battle.

The Corruption corrupts things, apparently. Here it is corrupting a town.

I bet New World’s devs have made up loads of silly fantasy words, so you’d think they could come up with something better than yet another instance of ‘Corruption’, but oh well! I’m replaying Dragon Age at the moment and also want to put a moratorium on blight and other synonyms.

Here’s something much nicer, a wee boar.

New World’s in alpha testing at the moment, and another batch of invites went out recently. If you signed up, check your inbox. If you haven’t already, you can still sign up here.