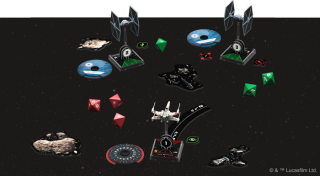 One of tabletop’s biggest miniatures games has a big shakeup today as Fantasy Flight Games announced a new edition that will tweak the core rules and add new force powers to the game’s pool of strategic options. The new edition will be backwards compatible with the previously released 58(!) ships in the game using a series of conversion kits. The most major change to the game’s rules seems to be the addition of Force powers, allowing force-sensitive pilots to alter the battlefield with new abilities.

Faction identities in the game’s three groups have been strengthened, with some ships shifting from one to another—notably Boba Fett’s Slave I making the permanent move to the Scum and Villainy faction. The First Order and Resistance, from the more recent movies, will also be broken out into entirely distinct factions from the Galactic Empire and Rebel Alliance. Fantasy Flight Games also cites numerous refinements to the game’s “flow” aimed at “refocusing on the physical act of flying starships.”

Also, the new X-Wing models will have wings that move between open and closed positions.

Launched in 2012, X-Wing Miniatures has been a huge success for Fantasy Flight Games and is now on its 14th wave of ship releases—which will contain content for and be compatible with both editions of the game. The second edition is scheduled to release in the third quarter of this year, and my informed guess is that we'll see at least limited release at Gen Con in early August.

Perhaps the most interesting development in the game has nothing to do with the little plastic ships and how they’re moved at all. An official squad-builder app will also release with the edition, both on mobile and web, so that players can more easily manage their collection and build squadrons.

The game’s new unit cards, however, don’t have printed upgrade slots and point costs on them—point costs and upgrades will now be managed from the app. That means the designers at Fantasy Flight Games can now balance the game dynamically and change requirements for game events and tournament seasons. Further, FFG will use the app to rotate cards and upgrades in and out of tournament legality, lending some spice to what was at times a very staid competitive metagame.

Beyond the app and force powers there isn’t too much information about precisely what minutiae in the rules has changed. Some actions will now be linked, allowing ships to chain a second action after resolving their movement. Others will now be red, causing the pilot to take stress after their use. There have also been changes to turrets, and some ship upgrades will now have limited-use charges. Pilots will also be able to repair damage to their ships.

You can see the official announcement at Fantasy Flight Games’ website or a slightly more detailed FAQ on the product page. FFG has also announced expansions and changes to the game’s organized play series.