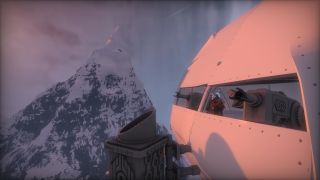 A world has shattered, leaving thousands of broken chunks of land floating in a vast sky. This is the evocative setting for Worlds Adrift, an ambitious, beautiful, and enormous multiplayer sandbox being developed by Bossa Studios. You’ll harvest materials, build your own airship, then fly freely between these islands. And on them you’ll find ancient ruins to explore, technology to scavenge, and other players to interact with—not all of whom will be friendly.

Looming ominously in this endless sky is a storm wall. A vast monolith of dark clouds, lightning, and raging wind. And the developers overseeing my hands-on suggest I try flying through it on an airship they’ve built for me. The ship looks like an old pirate galleon, but floating in the air thanks to some anti-gravity device stuck to it. On the exposed deck there’s a wheel to control it, a few cannons, and some gauges—including an artificial horizon—to help me navigate when I can’t see, which is likely in the thick of a storm.

However, things get off to a bad start when I somehow manage to snag the ship on a tree as we’re taking off and flip it upside down, destroying it. Everything in Worlds Adrift is governed by physics, so if you crash your ship, it’ll smash to pieces. Luckily the developers are able to conjure up a new one with a debug menu. But before we set off, there’s one more obstacle to contend with. We’re attacked by a giant, strangely beautiful, flying manta ray. We man the cannons on the deck and fire at it until it flops dead on the ground, then we begin our journey into the intimidating storm beyond.

There are three of us on the ship. I’m at the helm, and the others are on the deck manning the cannons. Those manta rays, and other creatures, can attack you in the storm too. I steer the ship towards the wall and slowly the blue sky is replaced by a deep, grey void. With zero visibility I have to use the artificial horizon and compass to make sure I’m keeping a steady bearing. But the violent winds battering and jerking the ship around make this difficult. I have to wrestle against the wind to keep it straight as my crew fire the cannons at pursuing manta rays. It’s a hell of an introduction to the game.

And, of course, it all goes wrong. I’m staring at the gauges, when I see one of the cannons fly past me and knock them clean off. They twirl into the storm, never to be seen again, and suddenly I’m blind. Bolts of lightning strike the ship, tearing it to pieces. My crewmates are gone. Then the ship turns upside down and I fall off, watching the wreck get smaller as I plummet into the depths of the storm. I can respawn at the nearest island, but my ship is done for, and my attempt to get through the storm wall is over.

Another player might come through this part of the storm later, and if they do, they’ll see the remains of my ship spinning hopelessly in the maelstrom. Worlds Adrift remembers everything its players do, and that information is stored on the server. So if you see a crashed ship, you’ll know it once belonged to another player, and it’ll tell you a story. That’s the most exciting thing about Worlds Adrift to me. A world filled with stories, all created by players, all sharing the same space. When the game is released I’ll be tackling that storm again, but this time with a sturdier ship.