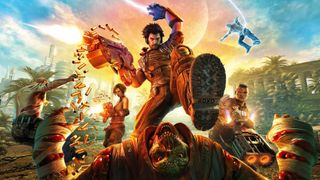 Find all previous editions of the PCG Q&A here. Check out some highlights:

- What is the absolute best gaming snack?
- What classic PC game is on your pile of shame?
- What's the most hyped you've ever been about an upcoming game?

While there have been some classic dramatic lines in videogames, it seems that we as a group tend toward the ludicrous and asinine when picking our favorites. For the sake of space, we've chosen to omit the entirety of Max Payne and Max Payne 2's scripts ("I was compelled to give Vlad his gun back... one bullet at a time"), but the team had some quality dialogue to share.

For this week's Wednesday Q&A, we want to hear your favorite line of dialogue in a game, whether it be dramatic, comedic, or ridiculous. Let us know in the comments!

Evan Lahti: Another one falls!

Only a handful of games are propelled by a single voice. Bastion's one. Stanley Parable's one. And Darkest Dungeon is one. You can't imagine Red Hook's grinding, grueling eldritch RPG without Wayne June's grim cheerleading ("Another one falls!") and ominous collar-tugging ("Ringing ears, blurred vision - the end approaches..."). It's an incredible example of how constraints—an indie budget—often produces the best design—an omniscient color commentator that reinforces the tone of the game at every moment, imbuing it with a spirit it wouldn't have otherwise possessed.

There's a staggering amount of voice work, but I've gotta give it to "Monstrous size has no intrinsic merit, unless inordinate exsanguination be considered a virtue." These timeless words were also echoed by Doomguy, "YOU ARE HUGE! THAT MEANS YOU HAVE HUGE GUTS!"

One of the reasons I love Dragon Age: Inquisition is the excellent ambient party chatter while you're just pattering around the world. Sera and Iron Bull make for some excellent conversations, but this moment is one of my all time favorites. Call me immature if you must, but I have one word for you: titsicles.

It's odd enough in RPGs that people will give you important quests and missions to undertake even though they've never met you before. And odder that often those quests (go kill the ghouls or bandits or wolves in some location) require no real proof of completion in order to get paid. For all the quest giver knows, you just sat in a pub for two days and came back, or maybe you already owned a few wolf pelts or ghoul femurs or some other highly inconclusive evidence that you actually did what you were asked to do.

So I like this line from West of Loathing that acknowledges the semi-ludicrous RPG trope of "Hey, complete stranger, do this thing. Did you do it? I guess you did it. Here's money."

The Malkavians are a clan of vampires cursed with madness, and one of the ways that manifests in Bloodlines is with some unusual, unique dialogue options. At one point an ordinary stop sign in the street pops up a dialogue box and a one-sided argument begins. You can repeatedly shout at it, "No, you stop!" in the middle of the road like a loony and if you follow this to the end, that's where my favorite line happens. "You've made a powerful enemy today, sign."

I have never played Dance Central 3. And forgive me, because I don't think it was ever on PC. But I think about the audacity of writing a time traveling story into a dancing game, and making you a Dance Cop who protects the world through dancing, and introducing that entire concept with the line above. God bless you, Harmonix.

Andy Chalk: "I will kill your dicks"

Bullestorm may be the most wantonly juvenile game I've ever played, but I absolutely loved it. And I admit, it was the dialog that did it for me: The shooting was great, but the script and voice acting were truly next-level—so much great stuff in there. Steven Blum was excellent, but for my money it's Jennifer Hale who's the standout. She gets a lot of credit for her work, particularly her portrayal of Shepard in Mass Effect, but delivering lines like this with a straight face is the real showcase of her talent:

"Please! We've been stuck here forever! Help us get an evac off-world?"

"Yeah? Go fuck yourself! You shitpiles give chase, I will kill your dicks!"

"What? What does that even mean?"