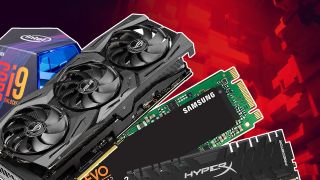 The past 12 months brought some interesting developments to the PC, such as AMD's first and second round of graphics cards based on its 7-nanometer Navi GPU architecture, lower solid state drive (SSD) pricing with bigger capacities to boot, the advent of PCI Express 4.0 hardware, the launch of third-generation Ryzen processors, and a return to relative affordability for DDR4 RAM, to give a few examples. But 2019 has come to a close, and it's onward (and hopefully upward) to 2020. What will the new year bring in the hardware space?

That's a good question, and though I do not have a crystal ball to peer into, I can make some educated guesses based on current developments, as well as various leaks and rumors that have been making the rounds. PC gaming will continue to thrive, that much I can say with supreme confidence. More specifically, however, there are some hardware developments in the making that could give PC gaming a boost in 2020, while others will only offer a nudge. Here is what to expect.

For all of 2019, real-time ray tracing in games has been the sole domain of Nvidia, primarily by way of its GeForce RTX series graphics cards. Technically, Nvidia's recent GeForce GTX cards also support ray tracing, though they lack dedicated hardware (RT cores) to make it practical, for the most part. Either way, Nvidia has stood alone in the realm of ray-traced visuals, but that will probably change in 2020.

I say "probably" because it could be early 2021 before AMD launches a version of Navi with hardware support for ray tracing, depending on how things play out. What we know for certain, however, is that ray tracing is headed to Navi. We know this because Sony confirmed that the custom Navi GPU in its upcoming PlayStation 5 console will feature ray tracing support. And if that wasn't enough, AMD CEO Dr. Lisa Su indicated in January 2019 that ray tracing hardware for PCs was already "deep in development."

It's just a guessing game as to whether a version of Navi with hardware dedicated to ray tracing will emerge on the PC before the PS5 launches at the end of next year, or if it comes out sometime after. My guess is the former. It's hard to imagine another round of higher end Navi GPUs being released without ray tracing support, and it would be unusual for a game console to be technologically superior to the best PC hardware available. So as I write this, I've changed my mind—forget about "probably," AMD will be doing ray tracing on the PC in 2020. Take it to the bank.

Up to this point, Nvidia has not really had to push the envelope in terms of process nodes, because AMD has not been able to pluck the performance crown out of team green's hands—the GeForce RTX 2080 Ti is still the best graphics card, and if a GeForce RTX 2080 Ti Super comes to pass, Nvidia will extend its lead at the top-end even further. Nevertheless, I believe Nvidia will make the transition to 7nm in 2020.

AMD is not standing pat. Even though its Radeon RX 5700 XT is not the fastest graphics card on the planet, it's a burly card in its own right. The next version of Navi will kick things up a notch, and Nvidia will respond in kind with another GPU of its own. By making the move to 7nm, Nvidia will be able to pack more features and power into its next-generation Ampere GPUs (or whatever they end up being called).

Contrary to what the leaks and rumors might suggest, nobody really knows what the actual specifications will be for Nvidia's next-gen GeForce RTX 3080, based on Ampere. Anyone who claims otherwise is making stuff up. However, we can expect more RT cores for ray tracing, more CUDA cores for general purpose graphics, and more Tensor cores for machine learning chores. Higher clocks are likely too, perhaps enabling Nvidia's GPUs to consistently run at more than 2GHz for the first time. Wouldn't that be nice?

I'm calling it now, PCI Express 4.0 will not have a meaningful impact on PCs in 2020. Look, put the Nerf gun down, I'm just the messenger here. Or I suppose soothsayer would be more accurate. Either way, it's not my fault PCIe 4.0 isn't really a big deal in the realm of gaming, it's just the way it is, and will continue to be throughout 2020.

That's not say hardware developers should turn their nose up at PCIe 4.0. AMD is already embracing the spec with its third-generation Ryzen processors and accompanying X570 chipset. The primary benefit is having more high-speed lanes, which paves the way for multiple bleeding edge SSDs and more bandwidth for graphics cards. However, PCIe is not much of a bottleneck for graphics, and even though current PCIe 4.0 SSDs are capable of 5,000MB/s file transfers, and faster SSDs are coming soon, it makes virtually no difference in gaming, even when compared to a SATA-based SSD that tops out at around 580MB/s.

I think there's a chance Intel finally jumps on board the PCIe 4.0 bus with its 10nm desktop CPUs  (more on that in a moment), it just won't be a game changing development, at least not in 2020.

Intel finally does 10nm on the desktop

Remember when Cannon Lake was supposed to usher in the era of 10nm CPUs for Intel, only to be delayed and ultimately scrapped? Well, even though Cannon Lake is dead in the water, Intel will launch 10nm desktop CPUs in 2020. In fact, I have it from a rock solid source that Intel will "absolutely" launch 10nm desktop CPUs in 2020, and they will be "pretty cool ones" at that.

It doesn't take a leap of faith to believe these will materialize. Yes, Intel's been stretching its 14nm node for what feels like 100 years now, but we finally saw volume shipments of 10nm silicon on the mobile side, with Intel's Ice Lake processors.

What's harder to guess is when exactly 10nm desktop CPUs will materialize. I predict they will come out closer to the middle of the year, if not the second half. In the meantime, Comet Lake-S will see another round of 14nm manufacturing to tide us over.

While Intel will finally find its way to 10nm in 2020, AMD will roll out fourth-generation Ryzen 4000 processors based on its Zen 3 CPU architecture before the year is over. These CPUs will be based on a refined 7nm+ manufacturing process, and should yield faster clocks, better power efficiency, and perhaps more cores (though Zen 2 already pushed the mainstream category to 16 cores/32 threads).

After that, AMD will roll out its Zen 4 CPUs, likely based on either a 6nm or 5nm process node. We'll hear about these towards the end of 2020, though I don't expect them to materialize on retail shelves until sometime in 2021.

2020 will see the introduction of even more SSDs, which will be faster and higher in capacity. They'll also deliver more bang for your buck, except at the high end. At the very top, SSD makers will push the envelope with even faster PCIe 4.0 models—all current PCIe models are powered by Phison's PS5016-E16 controller, and Phison says it has a next-gen controller in the wings that will push speeds to 6,500MB/s.

I'm more excited about seeing SSDs grow in size at more affordable price points. Whereas capacities beyond 2TB are mostly a luxury right now, I think 2020 will see 3TB and 4TB SSDs become cheaper and more feasible. Unless more fires break out and NAND prices go up again.

DDR5 will finally come to desktops

DDR5 modules will arrive in 2020 (at long last!), and with them will come double the density and double the bandwidth of DDR4. That will make for some impressive gains in synthetic benchmarking, though I doubt the real-world impact will be anything significant, at least not right away. It will take some time for system platforms to really leverage DDR5, and 2020 is too soon to expect big gains in actual performance.

DDR5 could also usher in bigger memory kits, though that will be of limited benefit as well (for gaming PCs, anyway). After all, those who need oodles of RAM can already buy 256GB memory kits. That said, bigger and faster DDR5 memory kits could push down pricing on DDR4 RAM, so that's something to potentially look forward to.