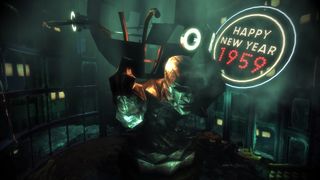 Happy New Year! It's 2020, wow! A whole new year with a whole new fresh, blank calendar stretching out before us, its squares tantalizingly empty and begging for new promises to be scribbled in. It's the perfect (if a bit predictable) time to make some changes in your life.

Maybe you've got a new year's resolution to eat healthier, or exercise more, or stay organized for more than a month, or finally hunt down and destroy that evil clown who terrorized your town during your childhood, or some other goal for self-improvement and increased happiness. And as we look forward to the games coming out in 2020 it's not a bad time to make some PC gaming resolutions for the new year, too.

Got any bad gaming habits you want to quit? Any good habits you'd like to adopt? Anything you want to change about the way you game in general? We've listed some of our 2020 PC gaming resolutions below, and we'd love to hear any you have in the comments.

I'm very guilty, particularly when I'm stressed, of what I'd call 'passive gaming'—that is, filling time by mindlessly playing something I'm not really getting much out of. That might be a game I've already sunk a hundred hours into that I'm just going through the motions in, or something quick and easy where the numbers are always going up, or, worst of all, a live service game that's got its claws in me with daily quests and other silly obligations.

Sometimes it's the perfect way to relax, but too often it's simply wasted time, and this year I want to take some of that back. As much as possible, I want my free time to be active and engaging - whether that's getting stuck into all those neglected games I keep meaning to get around to, or making more space in my life for my non-gaming hobbies and interests.

Chris Livingston: Stop playing a game when it stops being fun

Well, pretty much what Robin said. My current daily routine—or maybe it's a grind, or a rut—is to pop into Red Dead Online for about an hour or two a day. There are a lot of great ways to spend a couple hours in the huge, lovely world of Red Dead but I pretty much do the same things every time I play: moonshining and trading missions. This stuff was fun the first few times I did it but now it's just a chore that never really varies, and most of it is just filling the time while the moonshine is brewed and the trader goods are completed so I can climb into a wagon and slowly drive it somewhere to get paid.

At this point I'm not sure why I'm even still doing it, other than that it occupies me for a couple hours and sometimes I'll get a small reward if I level up. There's nothing wrong with a mindless gaming session, and it's not a bad way to unwind after a long day, but there are other games I could be playing, or books I could be reading, or words I could be writing, or hell, even other activities I could be doing in Red Dead besides these same two things every single day. There's no point in spending a couple hours a day doing something I'm not enjoying, and I need to do much less of that this year.

I'm similar to Robin in that I'm painfully aware of how much time I spend playing games that don't really enrich my life in any real way. I mean, do I really need to play another 100 hours of Rocket League or sneak in that extra round of League of Legends? The answer is no.

So this year I want to just play less games across the board. Last year I took a break from gaming for the entirety of January and really enjoyed the detox, so I'm doing the same in 2020. After that, I guess I'll just have to be an adult and try and be more conscious of how I'm spending my time. It's not that I think gaming is a waste of time, but over the past years I've noticed how it's steadily taking away from other hobbies I love like creative writing, reading, programming, etc. I have some big aspirations for 2020, and I'll be damned if I get to the end of the year and the only meaningful thing I've done is climb to Gold IV in League.

At this point we should just form a support group.

Chalk me up as another member of the support group. I actually like gaming to unwind: I spent a lot of time in Destiny 2, post-Forsaken, listening to a podcast or watching sports on the second screen. It was a good way to relax during stressful periods like literally every magazine deadline. Unfortunately, post-Shadowkeep, Destiny 2's seasonal structure has changed in a way that doesn't play well with my completionist tendencies. Where seasonal content used to be preserved in amber—untouched, but accessible—now, at the end of each season, the activity and its associated triumphs and seals, all disappear forever.

For some reason this is maddening to my brain. If I'm to play Destiny 2—a thing that I like doing—I must acquire these pointless seals even if doing so is an absolutely miserable experience. It was fine when there was unlimited time in which to get them: I still only have a handful of the year two seals—I even took a break from the game for most of the Season of the Forge—but because I can still choose to get them, my brain is happy for me to never bother. Now, though, the ticking clock has changed my relationship with Destiny 2 for the worse. By embracing and designing around the fear of missing out, it feels exploitative in a way the series never has before. I'm not quite ready to disengage from Bungie's shooter entirely just yet, but I'm starting to think I'll be better off if I do.

I've always been a champion of oddball games. It's one of the main reasons I love PC gaming. But last year I stuck largely to the big hitters, and didn't devote much time to delving into the exciting, bizarre, indie-minded side of game dev. So this year I am going to play a lot more strange, experimental stuff, and I'm going to try and write about it more for PC Gamer. Because, really, this is often where the most exciting, provocative, interesting stuff is happening in the medium. I mean, I still love 'AAA' games, and I am fully ready for the next Assassin's Creed and Cyberpunk, but in 2020 I'm going to try and rebalance my gaming to be a healthier mix of expensive blockbusters and lo-fi oddness.

I stuck to my resolution of playing fewer games that I set last year and I'm so happy I did. I've had more time for relationships, exercise, cooking, reading, writing, and long walks. But now I'd like to take it a step further and curate the few games I focus on a bit more.

When I read, I love taking notes and free-writing to apply what I learned so it doesn't slip away, or to see where my own ideas branch out. I'd like to latch onto the games and aspects of games I'm most drawn to and study them more closely. I love Souls games, for instance, but when I say that I really mean I love the sense of venturing out into an unknown, dangerous space—the art of sustaining tension in a nonlinear environment without nose diving into frustration. I'm getting started by playing Blasphemous, one I can't believe I missed in 2019. It's some of the best pixel art I've ever seen, some really dreadful Goya-inspired Catholic horror. Like, after you kill the first boss the player-character takes off their helmet, fills it with the blood of the prison warden, and puts it back on. Every scene, every character design is something to unpack. I like the unpacking part, so I'm going to continue to spend less time with games overall, but will use that time to really soak in the ideas and moods that move me the most.

That might seem like a small number, but it's as many games as I've completed in the past two years combined! I'm not even talking about long 20+ hour campaign games, either—Untitled Goose Game and Jupiter Hell totally count. I've got multiple candidates on my list of games to complete as well, including stuff from late 2019 like Red Dead 2—though it if takes 90 hours to complete the singleplayer campaign, that's probably not going to happen. Anyway, five is a nice number, one game per finger. I might need to run fewer benchmarks to get through the games, but it's a sacrifice I'm willing to make.

With the number of games coming out ever-increasing, it's easy to play a game, finish it, and straight away move onto the next one—like some sort of weird machine working on a conveyor belt of games. The credits have barely started before I'm booting up the next game.

Earlier last year, I had completely written off the relaxing rhythms of the Mutazione because I got bored within the first hour, three other games in the back of my mind ready to replace it. When I did eventually go back to playing it, it became one of my favourite games of 2019 because of the same reasons why I first dropped it. This year, I need to accept that I won't play every game as soon as it comes out and learn to give my full attention to one I'm currently playing. I'm going to give myself bonus points if I decide to play the same game twice in a row.

Jody Macgregor: Get fit with games

I realize fitness resolutions are the worst but since I found out how much of a sweat you can get going with Just Dance, I'm set on playing it five days a week instead of doing regular aerobics. I'm a sucker for gamification. Since the aim is just to move around vigorously enough to burn some calories I'd rather be leveling up and unlocking stickers while that happens, because my brain is as broken as my body. If the cost of that is learning there are a bunch of Katy Perry songs I actually like, so be it. When Ubisoft opens their next E3 conference with a bunch of dancing pandas or whatever as they hawk Just Dance 2021 I expect to be the one person who cares.

Joanna Nelius: I don't have a resolution

I'm already happy with the ratio of time I spend playing games compared to doing other things like creative writing, reading, playing tennis, and going out with friends. I've been a happier person since I stopped spending all my free time at home playing videogames. Everything in moderation, I say! If I had to pick one thing I wanted to change about my gaming habits, it's playing more indie games.