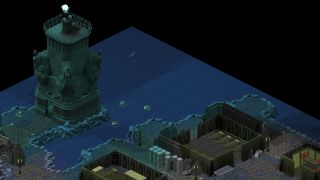 I've heard great things about subterranean CRPG Underrail since it released late last year, and I'm looking forward to playing it when I finally finish Divinity: Original Sin sometime in 2055. If you've been enjoying it, however, you'll be pleased to hear that an expansion is on the way. Underrail: Expedition will allow you to explore a "massive" underground ocean called the Black Sea, which naturally is home to pirates, crumbling ruins and dangerous beasties. Still, it should make a change from crawling around endless metro tunnels.

You'll be able to hop into Expedition from Underrail's midpoint onwards, and once you've taken the plunge you can explore "over 100" new areas, make friends/deadly enemies with a few new factions, and collect/shoot/enhance your character with additional loot, monsters and skills respectively. You'll also be able to improve them past level 25, which is nice.

Developer Stygian Software reckons Expedition will release sometime in the first half of 2017. You can read more about it here.