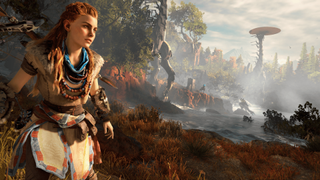 Horizon Zero Dawn, Guerrilla Games' post-post-apocalyptic PS4 exclusive, will be hitting PS Now in January, finally allowing you to check it out on PC if you have an active subscription. Excellent Uncharted spin-off Uncharted: Lost Legacy will also be added to the list.

While Horizon Zero Dawn doesn't push the boat out, it's extremely polished, has some genuinely great combat and you can hunt massive robotic beasties. A lot of it is very familiar, but what it does, it does very well. Unlike other games set after the end of the world, it's also incredibly pretty. The apocalypse has worked out quite well for nature.

You'll be able to check out the expansion, too, since it will also be included with the subscription. Horizon Zero Dawn, Uncharted: Lost Legacy will be on PS Now from January 2 until April 7. It's not a very long time, so you'll need to get cracking.

Earlier this month, YouTuber Anton Logvinov reported a rumour that Horizon Zero Dawn was going to be dropping the PS4 exclusivity and launching on PC next year. An announcement was coming soon, he said, and it could arrive in February. It seems like a long shot and may have actually been referring to its appearance on PS Now, but with February fast approaching we'll find out soon enough.

You can get a PS Now subscription here, along with a week-long free trial if you're a first timer.