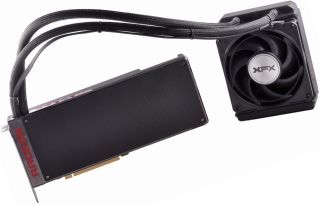 It looks like AMD and its hardware partners are trying to clear out old inventory to make way for Vega. Either that or XFX's price drop on its Radeon Pro Duo card on Newegg is simply an outlier. Either way, it's now priced at $800, down significantly from the going rate (around $1,400).

That is by far the lowest price we've seen for a Radeon Pro Duo card. The only other model available on Newegg is from Sapphire and it's listed at nearly $1,800, albeit from a third-party seller. The same card on Amazon is available for $1,400, while the XFX version is listed at $1,350.

The Radeon Pro Duo sports two Fiji GPUs and 4GB of first generation high bandwidth memory (HBM) per GPU. It also has 4,096 stream processors, 64 ROPs, and 256 TMUs per GPU, and is capable of up to 16 TFLOPS of single-precision compute performance.

In our tests, the Radeon Pro Duo is slightly slower than Fury X in Crossfire, or about equal to the Radeon R9 Nano in Crossfire. When Crossfire in a game works, performance is really good—the Radeon can pull off smooth framerates at 4K in such situations.

At this point though, you're probably better off picking up a high-end Pascal card or waiting for Vega. Even with the price drop, the Radeon Pro Duo needs Crossfire to work well for the card to reach its full performance potential. That said, it's certainly more tantalizing at $800 versus $1,400.

You can find the XFX Radeon Pro Duo for $800 here. Fudzilla notes that it was out of stock earlier, but it's back in stock at the time of this writing. If it shows otherwise, keep checking if you're interested in this card.