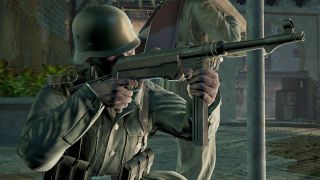 Day of Defeat: Source is Valve's long-forgotten child, left in a cupboard while its much more popular sibling Counter-Strike gets all the love. Fortunately, Days of War, a game heavily inspired by Day of Defeat, has finally launched after over three years in early access.

The game, which developer Driven Arts successfully Kickstarted back in January 2017, borrows heavily from Day of Defeat, with a pace that's somewhere between Day of Infamy's tactical approach and Battalion 1944's Call of Duty-inspired shenanigans. It's even brought over remakes of a few of DoD's most popular maps, like DoD_Donner.

It's not been an easy journey for Days of War. Following a failed Kickstarter in 2016 and an ill-fated early access launch in 2017 at the same time as its successful, more successful campaign, the game was briefly removed from sale as the entire game was overhauled. At the time, Driven Arts cited problems such as performance issues and bugs, as well as a high price, damaging the game's player count, and for a while it looked like the game had disappeared off the face of the Earth.

Fortunately the game resurfaced in August 2019 with a new publisher, Graffiti Games, and a second attempt at early access in November. While the response wasn't exactly glowing, it was markedly better than the first time, and now it sits on a "Mostly Positive" rating on Steam.

I was a huge Day of Defeat fan back in the day, so any game offering up that same mix of teamwork and tactical-but-accessible shooting immediately appeals to me.