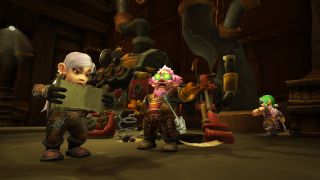 WoW patch 8.3 this week marks the launch of new trainable pets for hunters; the second Looking for Raid difficulty wing for the Ny’alotha raid; a chance to be an evil rare creature; the right time to start working on an alt; and the continuation of the Darkmoon Faire.

This guide covers the week of February 4-10 (February 5-11 on EU servers), so here’s everything you need to know about how to excel in Azeroth.

The Darkmoon Faire: grab your bonus reputation and some new arcade games

The Darkmoon Faire runs until Saturday night, so grab your WHEE! buff from the roller coaster or the carousel to give yourself a bonus ten percent to reputation and experience gains. While you’re there, check out the brand-new Darkmoon Faire Arcade, which offers life-size versions of some pretty entertaining mini-games.

Some are familiar, including the pattern-matching game from the Tortollan world quests and the circuit-uncrossing game from Nazjatar world quests. But one of the most fun is a reboot of the old Minesweeper game that came with Microsoft Windows.

'HexSweeper' has you stepping on hexagons to clear them or right-clicking on a space to mark it as a mine. If you fail, you explode (and die, though you won’t take durability damage.) There are five levels, plus level X, which doesn’t label any of the hexes to start.

So far there’s no indication of any rewards for playing, but you can play all of the arcade games for an entire day with a single game token.

Hunters, get your new beasts

Hunters received the ability to tame a collection of new animals in a recent hotfix, including Dread Ravens, Rocs, Sea Serpents and Mechanical Chickens. One of the prettiest is the world boss Rukhmar in Spires of Arak (from the Warlords of Draenor expansion), who are now tamable.

The second wing of the raid Ny’alotha, the Waking City, is now open in the Looking for Group tool on Looking for Raid difficulty. This wing includes the bosses in the Halls of Devotion: Dark Inquisitor Xanesh, Vexiona, The Hivemind and Ra-den the Despoiled.

Is it finally time for alts?

Battle for Azeroth has been an extremely alt-unfriendly expansion, but as the busy Patch 8.3 grind starts to settle down, it may be time to dust off a second character. Keeping up requires some hefty effort the first week, as you move through the intro quests and do your first series of Horrific Visions to get your new Legendary cloak leveled. (Hint: Every time Magni tells you to meet him somewhere, talk with him again. He doesn’t offer you the opportunity to skip scenarios until you do.)

But after the initial effort, you can keep up on an alt by doing the weekly major assault, the biweekly lesser assaults, one Horrific Vision, and whatever daily minor visions you manage to squeeze in—those tend to only take a few minutes. You’ll end up with two essences for your Heart of Azeroth legendary neck just from doing these steps, plus another if you take part in the Ny’alotha raid on that character.

The Worldvein Essence, obtainable by running the weekly Island Expeditions quest, is relatively easy to obtain and was recently buffed substantially, becoming of the best essences for some classes.

Essences remain the stumbling block for alternate characters, but it’s possible to get an alt in reasonable shape in 8.3, if not perfectly min-maxed.

Turn yourself into a Rare

You can become a Void Wraith, a rare mob in World of Warcraft, thanks to a secret recently dug up by the Secret-Finding Discord. It’s a long chain, ending in the ability to turn into a giant purple evil wraith, marked on players’ maps as a rare creature with extra rewards. You’ll be hostile to both factions, and if you manage to kill some players before you are killed, you’ll reap a few rewards. Amusingly, players who kill you will receive the same benefits as killing other rares, including currency and azerite power for their neck pieces.

The short version is that you have to kill the summoned creature Adherent of the Abyss in Stormsong Valley, then use the item Aether of the Abyss when in a N’Zoth assault of Vale of Eternal Blossoms of Uldum. You’ll see a Shard of Corruption in some of the glowing purple cracks on the ground. Looting it gives you a quest to find 20 of them.

When you complete that quest, you are transformed into a Void Wraith immediately, with 4.6 million health and new abilities. To earn your rewards, you’ll need to kill ten players of either faction without dying.

Check out our weekly WoW advice for January 21-28 on the next page.