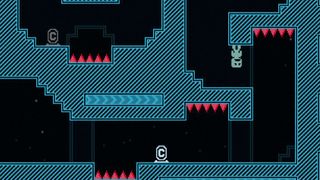 VVVVVV, Terry Cavanagh's gravity-flipping platformer, is a decade old, and to mark the occasion Cavanagh has decided to make it open source. The news was revealed at AGDQ today, and you can get your hands on the source code now via GitHub.

In case you've somehow avoided it for a decade, VVVVVV's a smart, minimalist platformer with one simple but brilliant twist: instead of jumping, you need to reverse gravity. It's tricky but never cruel—you can turn off death entirely if you want, and there are plenty of checkpoints.

Both the desktop and mobile source codes are available, and Cavanagh has provided some notes to accompany them.

"I think even a peek of the source code will quickly reveal that VVVVVV is not a technically sophisticated game! Even by the standards of self taught indie devs, it’s kind of a mess," he warns. Little does he know, it's all equally indecipherable to me.

"I was young and more interested in getting something on the screen than implementing it properly," he writes. "Maybe the best thing about VVVVVV’s source code is that is stands as proof of what you can hack together even if you’re not much of a programmer."

Check out the notes on Cavanaugh's blog.