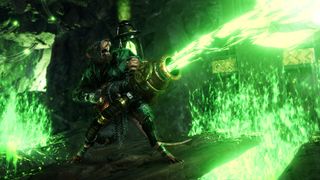 Next week, a new update will bring two major new features to our 2018 Co-op Game of the Year. The update will not only overhaul the deeds system by adding a new weekly challenge, but also finally provide a purpose for the empty picture frames that have been hanging on the walls of players' keeps for nearly a year.

First, the weekly challenge. Each week, a new special challenge will be temporarily available in-game. "Every week is a new type of challenge – we call them mutators in-house,” Fatshark CEO Martin Wahlund tells me. “It's basically a different way to play an existing level.” In the first, whenever you kill a special enemy, it will split into two of a lower tier – based on the Warhammer concept of Pink Horrors splitting into Blue Horrors.

“It lets us play around a lot,” explains Wahlund. “We have built a lot of different things, and some of them are just crazy. We could potentially do things like drop a lot of Sack Rats in the start of the farm level, so you can't see them, just hear them running around, and you try and catch ten in one minute. A lot of them are probably going to be [set across] full levels, because that's what people expect to play, but we could be more crazy if we wanted, which is nice.

For now, weekly challenges will offer regular loot, but the eventual aim is to tie the challenges to a system that lets players earn specific cosmetic rewards through play.

The second part of the update is collectible paintings to hang in your keep – a cosmetic feature that will let you show off your in-game achievements to the people in your lobby. “The core thing is to give the player something new to do,” says Wahlund. “So you can collect painting scraps, and also there's some challenges you can do to get new paintings.”

“Since we're working with the license, we have access to all the published Warhammer art since forever,” says Mårten Stormdal, Vermintide II's executive producer. “If it's in a book, we can use it—and we are using it because we love a lot of it. It's so much great art.” One example Mårten gives is completing all of the Shadows Over Bögenhafen weekly quests. Doing so will give you the front cover for the Shadows Over Bögenhafen roleplaying book from 1987. “That's how far it stretches in all directions," says Stormdal. "We can use everything and we do, and we find different kinds of art so you can get the keep you want with the style you want.”

Talking to Fatshark, it seems much of Vermintide II's first year was spent improving the underlying tech and infrastructure, and learning how best to run a live-service game. Now that work has been done, next week's update is just the beginning. You'll find more details about Vermintide 2's major 2019 plans in the next issue of PC Gamer magazine, out in early March.