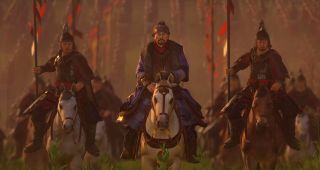 A few turns into my Total War: Three Kingdoms - Mandate of Heaven campaign and everything is already falling apart. As the Emperor and ruler of the Han dynasty, I might be a big shot, but I've got looters at my gates, traitors in my court and a huge rebellion kicking off up north. I'm in heaven.

For the second of Three Kingdoms' campaign expansions, Creative Assembly is doing things a bit differently. Instead of a separate miniature campaign, Mandate of Heaven has been integrated in the main campaign as a sort of prelude, expanding things by around a decade. That's not very long in the context of Total War, but it has ramifications that extend well beyond those early years.

Several returning leaders are once again available with the new start date, though their situations are all different from what you might be used to from the base game. The real focus, however, is on the newly playable Han Empire and the originators of the Yellow Turban Rebellion, both of which are fighting for control over the burning empire.

Both factions have multiple leaders for you to play as, some with easier starts than others, but in all cases it's a bit of an uphill struggle. As the Emperor, possibly the person in the worst position, it's a bit of a nightmare. Despite being top dog, the Emperor only has direct control over the capital, with the rest of the empire being split up between other warlords. To use all that power you have, then, you have to keep lots of people happy. That ain't easy.

The real threat to the empire are the eunuchs. Playing as the Han, you have to contend with a new system where three groups are vying for control over the court, each with their own supporters. The eunuchs run the bureaucracy, and their influence costs China greatly, but managing the empire sometimes necessitates giving them even more power, like giving members of your court new jobs that confer lots of bonuses. Then there are the warlords who swear fealty to you but who are just waiting for you to screw up. And finally there's the dynasty itself, representing your powerbase. Juggling these three factions is at the heart of playing the Han, and brings Three Kingdoms closer to Paradox-style grand strategy, something that makes me extremely happy.

With Three Kingdoms, Creative Assembly finally built a game with compelling diplomacy and economic systems, but no other faction has to engage with them quite like the Han. Usually the campaign eases you in, but here there are a lot of immediate problems that can't be solved with a big army. Instead you'll need to butter up your mates, beg for cash and try desperately to stop everyone from starving, all while an increasingly large horde of rebels amasses just across the river.

The rebels don't have nearly as many problems to worry about at the start, but don't mistake them for the simple option. Like the Han, they also come with new complexities and obstacles. Initially, the three brothers—you pick one but will be allied to the others—who lead the rebellion start off with no territory at all, but they benefit from lots of cash injections and missions that take the pressure off.

Off the bat, they'd be wiped out by the empire pretty quickly, but thankfully there are a few turns before the Mandate of Heaven war kicks off, giving them time to gobble up some land without having to fight off all of China straight away. The fragmented and competitive nature of the empire also gives them some breathing room. Before long, however, the imperial army and warlords will start coming for you.

The most important things in the rebels' bag of tricks are zeal and fervour. Zeal represents how up for a rebellion people are, shared among all three brothers. Zeal is increased by various actions, like getting into fights, but it will inevitably dwindle, inspiring counties to put their faith back in the Han and rise up against you. Fervour, meanwhile, makes things tougher for the Han. Yellow Turban buildings and troops can spread fervour, making it more likely that AI rebels will sprout in imperial counties.

These resources and effects make the rebellion feel like this organic force that you can take advantage of but can't always control. In my game, some of the AI rebellions were nearly as successful as my own, while other times they were quickly snuffed out and there was nothing I could do to help them, half-way across the country.

Like the Han, leading the rebellion also forces you to be a people person. Over the course of the campaign, more characters will start to appear, depending on certain prerequisites, and can join your cause, and you'll absolutely need their help. Sometimes, though, they have other ideas. He Yi, for instance, is a royal pain in the arse. He was introduced in last year's Yellow Turban DLC and now appears once you've secured the north. You can either ask him to join you as one of your generals or support him as a leader in his own right. Pick the latter and you'll be in for an interesting ride. He's suicidally brave, you see, which means he loves getting into whatever fights he can find, and he'll absolutely keep dragging you into wars. I love him, but he has no chill.

I'll still take He Yi over my useless brothers, however, because at least he can hold onto territory. Playing as Zhang Jue, I had to do a lot of babysitting for Zhang Liang and Zhang Bao. They might need some tweaks, as they're pretty timid at the moment.  At first they were fine, but once the war started properly they spent far too much time in their settlements and gave up counties that would have been easy to defend. I know this, because I was the one that ended up doing it most of the time. Sometimes they can be handy, especially if they decide to attack your war targets, and often I used them as a buffer between me and my enemies, but a lot of the time I had to pause my own plans to trudge all the way back to their territory to save them once again.

The war over the Mandate of Heaven can extend well into the main campaign, and probably will, so while it doesn't feel much longer than a regular campaign, it doesn't suddenly stop when you hit 190CE. It can also have a dramatic impact on what China looks like once you reach the original start date, with different factions becoming more prominent, while others could be wiped out entirely. My biggest rival in my very first game at launch, for instance, was dead and buried by 189CE in Mandate of Heaven. RIP Sun Jian.

It's a smart move by Creative Assembly, making the campaign richer and more dynamic without drawing things out. It's already a vast, time-consuming game, and I don't think 100 more turns would do anyone any good, especially if, like me, they've finally put to rest a mammoth-sized Total War: Warhammer Mortal Empires campaign.

Mandate of Heaven is unlikely to be the last of this kind of expansion. When you start up a new game, there's now a timeline where you can pick when you begin—again, evocative of Paradox grand strategy games—suggesting more additions to it will appear. Right now there are only three historical bookmarks, however, and only two of them are connected. There's plenty of room for more.