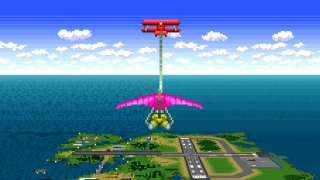 My favorite thing about emulating modern 3D games is the ability to run them at vastly higher resolutions—The Legend of Zelda: Breath of the Wild, for example, is stunning at 4K. Higher resolution rendering doesn't work so well for older pixel art games, or so I thought. A mod released today for Super Nintendo emulator bsnes, called HD Mode 7, shows how much detail you can get out of the faux 3D mode's graphics.

You can see the difference above—the left half of the image is what Mode 7 normally looks like, and the right half is "HD". I spliced the two screenshots together. Here's a comparison you can play with yourself.

Follow this link to see the original and HD graphics for Super Mario Kart, Pilotwings, and F-Zero, with screenshots taken by the modder. A quick mouse-over shows just how striking the difference is.

The mod is brand new, and Redditor DerKoun offers a bit of detail: This mod lets bsnes "perform Mode 7 transformations (incl. HDMA) at up to 4 times the horizontal and vertical resolution."

If you're unfamiliar with Mode 7, it's a graphical technique used in many SNES games to create the illusion of 3D by rotating background layers. It's used in Mario Kart's course map, the overworld you fly your airship around in in Final Fantasy 6, A Link to the Past's map, and so on. Mode 7 can also be used to create some other visual effects, but that's the most famous and familiar one. It's common enough in SNES games that this mod is a big deal. Because wow, does it look good.

The Pilotwings and and F-Zero comparisons are the most striking to me. In F-Zero, the background outside the track is a complete mess of pixels. I can discern patterns, but that's about it. In "HD" it's so crisp, I can actually tell what I'm looking at. And that's actually worthwhile in Pilotwings, where the blobby island suddenly becomes crisp. There's actually a ton of detail on the runway, for example, that's completely lost at the standard resolution.

The mod may not be this effective in other Mode 7 games. Then again, it might be even more effective.

bsnes emulator author byuu has already said he plans to include the feature in a future build of the emulator "if at all possible" and seems pretty psyched about the whole thing.

Guys, guys, credit u/DerKoun for the work. I only did 512x240 hires mode 7. It didn't look like a significant improvement so I stopped there. I did not realize that Pilotwings or F-Zero case was even possible. Madness.April 15, 2019

Modder DerKoun has indicated there's more work to be done on the mod, particularly checking to see how it works in other Mode 7 games and tweaking its implementation. I can't wait to see how it looks in Super Castlevania 4 and Final Fantasy 6.

Update: More examples are rolling in from emulator author byuu and others, so I'm rounding them up below.

FF6 Airship scene. So the thing to keep in mind is that even when it's not a visual detail improvement, this will provide for more uniform pixels that won't shimmer during motion. That's not really expressed in still screenshots like this. pic.twitter.com/UVVg5uhNIgApril 16, 2019