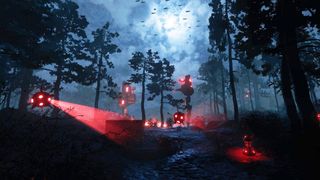 Big Robot’s procedurally-driven horror/survival hybrid has finally snuck out of Early Access. The new v1.0 update marks a major milestone for The Light Keeps Us Safe, which first launched on Steam last October.

The headline new feature of the new build is the addition of overall difficulty levels. Not only can you access these by starting a new game, but you can also change the difficulty on current game saves. If you’re finding all those android personal space issues a little too much, you can drop the robot-stalking action down to easy at any point now.

The developer does admit some performance remain, though. “Odd generations that seem to hit performance” are still a thing, but the studio has tried to streamline the game’s shaders to limit the issue.

The odd indie spook ‘em up has somewhat split opinion up to this point, so here’s hoping these tweaks have knocked this robotic prowler into better shape.