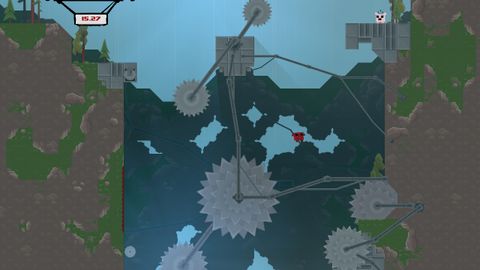 A delightfully challenging platformer, and the most fun youll have by dying repeatedly.

Imagine a bouncing cube of raw meat sliding into the teeth of a whirling saw blade. Spludge ! Now picture thousands more—as many as there are letters on this page—all going splat and splot as they disintegrate into an ocean of juicy beef-stuff. Gross. But your mental slaughterhouse still has nothing on my Super Meat Boy death tally. I flung the game's lovable, protein-based hero to his demise over 3,000 times just to beat the main levels of this relentlessly difficult 2D platformer. Include the search for collectables, the retro-themed Warp Zones, and the unlockable “Dark World” levels, and the number of exploded meat-bodies I'm responsible for is genocidal—but it's the fun kind of genocide.

Each of SMB's 300-plus levels are short-but-ruthless 2D gauntlets filled with hazards like piles of hypodermic needles, lava pits and meat-seeking rockets, plus devices like conveyor belts, fans and portals designed to fling you into them. Death is everywhere, and the only tools you have to avoid it are running and jumping. It's more complex than it sounds. Precise controls (this game was really made for a gamepad, but I got by with my trusty keyboard) and cleverly designed levels will have you sweeping across the screen with the grace of an Olympic figure skater over ice—until you're splattered about like discarded leftovers.

My replay of Level 5-20, for example, opens with about 100 Meat Boys (each reenacting one of my attempts to complete the level) dashing off the starting line simultaneously. Of those, 10 immediately slip into a pit of deadly salt and explode into meat-mush. Only inches further, another dozen meaty avatars are messily devoured by flying monsters. Above them, a small army is betrayed by disappearing platforms—they plummet into a pit of now-bloodied salt. The remaining Meat Brigade crosses the divide and reaches a small room, but is instantly scattered as rockets bombard the concrete floor. A few slip through rocket-made holes, but only one lonely survivor avoids the spinning blade beneath. The solitary hero bolts across a receding bridge and reunites with his eternally kidnapped love, Bandage Girl—but the reunion lasts only a moment before the evil Dr. Fetus steals her away again. Next level!

The levels instantly reset after each splat—often before the death splatter of your previous body has hit the ground—and this rapid-fire repetition makes the most difficult levels feel doable. With each failed attempt you'll learn a little more, and by the time you reach Bandage Girl, the bulk of it will be muscle memory.

If anything does stump you, though, you can skip any level to advance (except boss stages, which are required to unlock new worlds). But that would defeat the point. Super Meat Boy was made with love for fans of hardcore 2D platformers. It requires fierce trial-and-error, and getting your ass kicked a few (hundred) times is inevitable—that's what makes it so rewarding when you succeed.

Full appreciation of all its charms requires that you have the platformer background to pick up on the Castlevania and Mega Man references, but even the uninitiated can have their socks charmed off by retro graphics, simple animations and brilliant music. A few minor, yet-to-be-patched bugs crawling in the meat can't spoil its flavor; Super Meat Boy is a delicacy to savor—when you're not swearing at it.

A delightfully challenging platformer, and the most fun youll have by dying repeatedly.