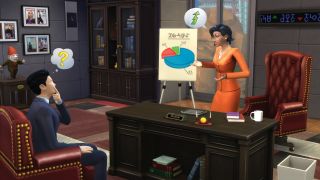 I’ve watched enough episodes of Eastenders to know how I should want life among my Sims families to go down. Sarah ought to be boffing Kenneth from across the street behind her husband Jim-Bob’s back. Their grade-school daughter Katie should be bullying every nerd in the playground, while her teenage brother Miles acts as a secret criminal mastermind plotting the downfall of poor, hapless Kenneth’s unsuspecting family.

Every dinner-table conversation should be fraught with tension and the possibility that, at any moment, a plate of food could end up flying at the wall.

It’s up to me to bring these webs of intrigue to life. But, let’s be honest, that’s not how I really play The Sims.

You don’t even need to scratch the surface of the franchise to realise what these games are about—possessions, and the relentless accumulation thereof. These are simulations of nothing so much as the endless cycle of capitalism. What do we want? The biggest, nicest house in the neighbourhood! When do we want it? As soon as we’ve chip-chip-chipped away at our career paths to cobble together the requisite savings, even if it’s a project that consumes multiple generations!

This week we're publishing a variety of stories about The Sims, taken from issue 334 of PC Gamer magazine. For more beautifully detailed articles about the best stories in PC gaming, consider subscribing to the magazine's US or UK editions.

> Stuff, not stories, forms the real heart of The Sims series
> Laundry was the best and worst thing to happen to The Sims
> How to speak like the Sims
> How The Sims has spearheaded queer representation in gaming
> The Sims 2 served as an extension of an already-embarrassing teen existence
> Making your favourites kiss in The Sims

And, lest we forget, this is a franchise that’s always been all about the add-ons. Ever since the original Livin’ Large content pack, EA has pumped out expansions like there’s no tomorrow—there’s nothing like the prospect of more items to spend on in-game to keep fans splashing that real-life cash.

We all think back fondly to that heart-shaped bed from the Hot Date pack... er, right?

The internet is a goldmine of players eagerly showing off their latest builds, fully furnished with every mod con you can imagine—and some you’ve not even dreamed of. From dollhouses to McMansions, they’re proudly displayed in galleries more meticulously curated than an influencer’s Instagram grid. Whether forged from the hands of a virtual god in build mode or funded through the get-rich-quick scheme of cheat codes, they’ve certainly spared no expense. And how’s a Sim to get there? As Angelica Schuyler said—work!

Perhaps it comes of having a type-A personality, but I can think of no greater satisfaction than starting a new family with nothing more than the base allocation of 20,000 simoleons and a budget- friendly house, getting them all jobs, and hacking through to the top of their careers, upgrading their lifestyle bit by bit along the way. Yup. That’s the good stuff right there.

Why go to a bar when you could play chess at home to work on your logic and inch closer to another rung on the ladder? That’ll win you a fat cash bonus, which you can spend on your own goddamn bar to put in the corner of the lounge. Priorities!

Ignoring all potential avenues for interpersonal drama in favour of the compelling lure of filthy lucre can lead to grinding harder in The Sims than you do in your actual, real-life job. Let’s not kid ourselves that this is anything approaching escapism. But I like to give my people what they want, one recently developed a desire to build a swimming pool, for example. Did she harbour a particular yen for butterfly stroke? Nope, she just felt a bit sad that this luxury existed, but she didn’t own it. Who can fail to identify with that?

Even once your Sims are ensconced in their Kevin McCloud- worthy dream home, surrounded by all the gilded possessions their hearts could desire, it’s an unfortunate case of mo’ money, mo’ problems.

Those hefty bills don’t pay themselves, you know, and lifestyle creep is real. Back to work Jim-Bob, you can’t just relax now!

I’m not immune to the fundamental irony at play here, of course—my Sims spend their lives keeping up with the Joneses, except they don’t even know what life is like for the Jones household. They’ve never had time to visit—not when there’s work to be done, a promotion to be won and a new whirlpool bath to be purchased.