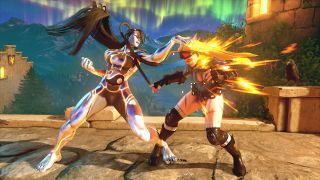 The Street Fighter V: Champion Edition release date is just around the corner, offering both new and returning players an option to get the vanilla version and previously-released DLC content in one neat package. SFV: CE bundles all 39 characters released to date, plus new character, Seth—who has changed considerably since their debut in Street Fighter IV.

SFV offers a bulging wardrobe of over 200 costumes, as well as 34 swanky stages that prove a dramatic canvas for high-octane scraps. With all of this included in Street Fighter V: Champion Edition, you can strut into fights fashionably and land your combos with ease and style. Cool cosmetics make you play better, right?

You can show off your skills with every character released to date very soon: the Street Fighter V: Champion Edition release date is February 14, 2020.

Seth debuted in Street Fighter IV as the main antagonist, and they're back for more. Previously the CEO of Shadaloo's S.I.N. weapon division, Seth was originally one of a group of synthetic beings set aside as spare bodies for M. Bison to use. In SFV, we see Seth using a female body. Judging by Capcom's gameplay videos, Seth's nostalgia costume will be available, portraying them in male form, too.

If you already own SFV, there's an option to purchase the Upgrade Kit Bundle for $24.99/£19.99 on Steam. This bundle essentially upgrades the base game to include everything from the full version of SFV: Champion Edition, allowing you to access the newer goodies without having to pay full price all over again. Purchasing the bundle provides instant access to all the content in the list above, bar the content that is yet to be released.

Until now, DLC characters could be bought with real cash, either individually or via seasonal character passes, or Fight Money. Street Fighter V: Champion Edition includes every SFV character released to date—and will include Seth from launch. That's  a grand total of 40 fighters. They are:

SFV's netcode has been one of the main gripes players have had since the game launched. Despite regular complaints from its vocal community, little has been implemented to target the problem. That was until January 2020 when Redditor, Altimor, released a patch that claimed to fix the netcode.

Regardless, Capcom is patching it officially. Yoshinori Ono, producer on the Street Fighter franchise, confirmed that netcode adjustments are on the way, very soon. Watch SFV fans rejoicing the news in the tweet below.

We hope everyone is excited for the release of Seth and Street Fighter V: Champion Edition this Friday! The team is working hard and wants to let #SFV players know that we’ll be making adjustments to the game’s netcode soon. We’ll share more details later. Thanks for the support! pic.twitter.com/YdfbAfuiVRFebruary 13, 2020

Capcom has already rolled out a couple of open beta tests for their upcoming free Tournament Mode,. If you haven't had a chance to put your skills to the test, now is the time to throw your hat into the ring.

Registration for SFV's open beta test 3 opens from February 10-20, or until it reaches its 512 player capacity (per region). The test date is scheduled for February 22 or 23, depending on your region, from 1PM to 5PM local time:

How to join the open beta test

Signing up for the open beta test is simple, but get in quickly to avoid disappointment. Head to the Capcom Tournament webpage, login using your Steam details and select your region. Communication during the event will be via this Discord channel.

Which rewards are up for grabs?

Winning is always nice, but it's the taking part that rewards you in this open beta. Participation rewards will include ten Fortune Tickets and an 'eSports Player' special title. Helping to test a brand new mode certainly pays off.