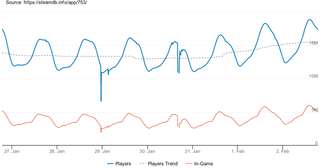 Steam's concurrent user count passed 18.8 million earlier today, peaking at 18,801,944 according to tracker SteamDB. The previous record was 18.5 million just about two years ago on January 6, 2018. As noted by SteamDB, this concurrent user record did not coincide with a record number of players in game, with only 5.8 million today against 7 million two years ago, about 1.2 million fewer. The previous record was boosted by the huge number of players in Playerunknown's Battlegrounds. It's not known what caused the current peak, though the time of the peak coincides with peak playtimes for all of Steam's top games.

.@Steam has broken its record for most concurrently online users that was held for two years. Previous record was 18,537,490 users. It's still increasing!But there's about 1 million less players actually in-game (≈5.8mil vs ≈7mil two years ago).https://t.co/D6WDHbz0B4February 2, 2020

2019 was a banner year for Steam, with several big changes to the client and interface. Steam has experienced massive growth in the past decade, with a consistent uptick in the Chinese market making Chinese Steam's new most-popular language. Valve seeks to bring Steam to more platforms, including Chromebooks. (And mobile, with Dota Underlords and remote play.) The draw of the platform is such that EA Games, who pulled their games from Steam in favor of their own Origin platform, are coming back. All of this is despite competitors’ attempts to take some market share from Steam. If you're not familiar with the 15 year history of Steam, might I recommend this feature? I might and I shall.