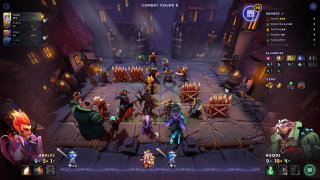 Dota Underlords is set to release from Early Access on February 25, alongside its first battle pass, per an announcement from Valve. The update also adds the game's fourth Underlord, Enno, the agility counterpart to the three others. The Underlords team is now going to go dark until release, polishing and finishing its launch features. Speaking of launch features, we’ve got a whole one on Underlords that I wrote for you. I spoke with designers Adrian Finol, Brad Muir, and Lawrence Yang about what it's like to work at Valve, the development of the game, and how they learned to stop worrying and defeat Valve time. You can find it in February's issue of PC Gamer magazine, which is cool. (If you don’t get PC Gamer, you can subscribe here in print or digital form. It is not very expensive.)

Underlords' launch will include the single player City Crawl, neat new (paid) battle pass rewards, and a spicy new rotation of heroes. The Summoner alliance will make an appearance, for example. As the development team told me, Underlords will "always be free," and some version of everything—including the city crawl—is available for free. Anyway, you can find out more about that in this month's issue.

Enno is the game's newest Underlord, the hero units that lead your ragtag bands, and he's a mangy little monster from Whitespire's slums. There’s a whole minisite on Enno if you're curious. For those with less time, here's the short version: Enno is a fast melee skirmisher with the ability to quickly escape and reposition around the battlefield every time he loses a quarter of his health. One version of him "heals and steals," using an an attack to damage the enemy crew and heal his own, and stealing the enemy's lowest-tier item for the duration of a combat. The other is focused on doing damage, laying out a swathe of poison darts and lasso tossing enemies around the battlefield for a rather large amount of damage. I got a chance to play with Enno before he released, and he is my new favorite Underlord just because of the sheer havoc he adds to already chaotic battlefields.

You can play Dota Underlords with Enno now on Steam, and you can read more about it in this month’s PC Gamer. Dota Underlords is currently free in Early Access, and is due to be released on February 25.