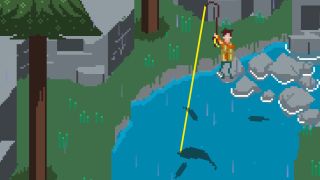 In our big honkin' list of the best fishing games on PC, we declared that a good fishing game should be both relaxing and exciting. The relaxation comes from spending time in a picturesque environment and the soothing repetition of casting your line and waiting for something to happen (and some nice music doesn't hurt). The excitement comes from feeling the bite on your hook and fighting to reel in a big, flopping fish.

River Legends: A Fly Fishing Adventure definitely points the needle more at the relaxing end of the dial (though it can be exciting, too, when you're fighting to land one of its bigger catches). And after an especially long and stressful week like the one we just had, sometimes you just want to chill out. Watch the trailer for River Legends below. Does that not completely hit the spot?

As you can probably tell, River Legends is designed for mobile with prominent on-screen controls you can press with your thumbs, and I do wish the PC version had pared down the UI since you're using the mouse and keyboard. But apart from that, I've been playing it over the long weekend and completely enjoying it.

You begin with just a single small pond available, and after finding a spot you like you begin casting, building up momentum with back and forth movements before letting your lure hit the water. Plunk it in the right spot and it'll drift slowly away with the current, letting you reach areas you can't hit just by casting your line. Then just enjoy the music, gaze at flitting butterflies, hopping rabbits, grazing deer, and other wildlife that roam the surrounding landsape, and watch the shadows of fish beneath the water as they grow tempted by your lure.

When you get a bite, it becomes a minigame of reeling in your catch with the proper rod angle and tension while keeping your lure icon in the sweet spot. Little fish are a snap to catch, while larger prey will fight more and take longer. The biggest fish will really challenge you, snapping your line if the tension is too high or slipping away if it's not high enough. It takes some practice to land the whoppers.

You can release your catch to earn XP, which opens up new fishing spots on the overworld map—shady wooded glens, cliffside ponds, winding rivers, and icy lakes. If you keep your catch you'll earn gold to buy new equipment: a sturdier rod that lets you reel in big fish more easily, new types of lures, and other gear.

Making progress doesn't take long. In the 2.5 hours I've played, I've earned enough gold and XP to unlock all the fishin' holes and earned enough gold to buy all the gear—though that doesn't mean I'm done fishing. There are still a few trophies I haven't earned, and of course there's the River Legend itself: an elusive, monstrous fish lurking somewhere in the depths on one of the maps.

I know where the Legend is, but I haven't managed to coax him out yet. Someday, though, I'll net him.

There are even a few neat little surprises I won't spoil, except to say you should eventually invest in boots (which lets you cross boulders and logs to reach more remote areas of the maps) and a flashlight, which will quickly pay for itself. In River Legends, there are more activities than just fishing.

River Legends is perfectly charming, with some lovely pixel art and animation, and its just what you need if you want to kick back and relax. You can find it on Steam and Itch. Here's the official site.