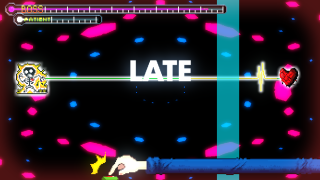 Rhythm Doctor is a game I've been eagerly anticipating since I first played its earliest Flash demo back in 2014. It's come a long way since that version, with a full Steam release planned for sometime this year.

It's a one button rhythm game that you play simply by hitting the space bar on the seventh beat of every bar. Where most rhythm games challenge you to complete a complex sequence of button presses—or to click on specific parts of the screen with pinpoint speed and accuracy—Rhythm Doctor doesn't have that luxury. There's only one button, after all.

Instead, each patient that you meet has a disease that fights back by trying to distract you from the otherwise simple task of counting to seven.

The first patient of the current demo suffers from a wi-fi jamming bacteria called connectifia abortus. It messes with your connection to the level, causing it to glitch out and degrade in interesting ways.

The demo also features a remixed version of that patient with an irregular time signature and even more offputting distractions.

...And then, later in the level, degrades the on-screen action so much that you're essentially asked to keep the irregular beat in your head. Often to disastrous consequences.

And that's just one patient. Elsewhere in the demo, there's a full musical number about overworked doctors (and the politicians trying to turn the public against them).

Another features one of the most inventive tricks I've ever seen in a rhythm game. Rather than explain it, I just recorded myself playing it on the real desktop that I definitely use every day.

7th Beat Games' Hafiz Azman tells me the level was inspired by the team's friend, TaroNuke, who used the moving window gimmick as part of an open-source Stepmania mod called NotITG. "He's based in the UK and has been holding an IRL NotITG sight-reading tournament every year for many years now," writes Azman, "where gimmicks like that are thrown at participants, it's amazing."

As for Rhythm Doctor, while there's no firm release date yet, you can get access to the latest demo by preordering the game on Itch.