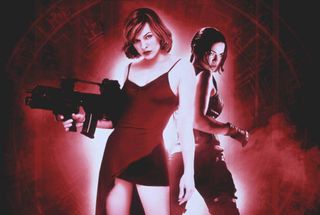 "The town of Clearfield, MD has long stood in the shadow of three seemingly unrelated behemoths – the Umbrella Corporation, the decommissioned Greenwood Asylum, and Washington, D.C. Today, twenty-six years after the discovery of the T-Virus, secrets held by the three will start to be revealed at the first signs of outbreak."

A decommissioned mental asylum is definitely spooky enough to be the centre of a Resident Evil story, and obviously it wouldn't be Resident Evil without the Umbrella Corporation. Clearfield is a less ridiculous name than Raccoon City, I guess? We'll see how it turns out.

I thought the first Resident Evil movie was one of the least-bad videogame adaptations around, and by the fourth movie they'd become so over-the-top ridiculous they were enjoyable again. A Netflix version might be aimed a little more down-to-earth than the one where an army of Milla Jovovich clones attacks the Umbrella Corporation's Tokyo office.