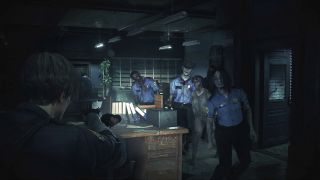 It sounds like the T-virus is spreading. Netflix is reportedly developing a Resident Evil TV series, according to Deadline. The studio behind the upcoming series, Constantin Film, also produces the long-running movie series.

A showrunner has yet to be picked, but the show plans to expand the Resident Evil universe’s mythology and follow the inner workings of the Umbrella Corporation. It also sounds like it will a post-outbreak setting where the T-virus has already spread and a new world order has been established.

Expect Resident Evil’s signature elements and some Easter eggs, but I wouldn’t hold my breath waiting for Tofu to burst in and start mowing down zombies.

The Paul W. S. Anderson movies, which pretty quickly stopped resembling the games, are decidedly not good, but they keep making money, more with every movie, making the series the most successful movie adaptation of a video game. It no doubt helps that they are six of them now.

Resident Evil’s animated adaptations—Degeneration, Damnation and Vendetta—are more faithful to the games, filling in gaps between the later ones. That hasn’t made them necessarily better than the movies, they’re not great, but if you’ve got a hunger for that Resident Evil lore, they might fill you up.

Instead of watching spin-offs, you should just go and play the latest game, which Andy called a celebration and evolution of vintage Resident Evil in his Resident Evil 2 review.