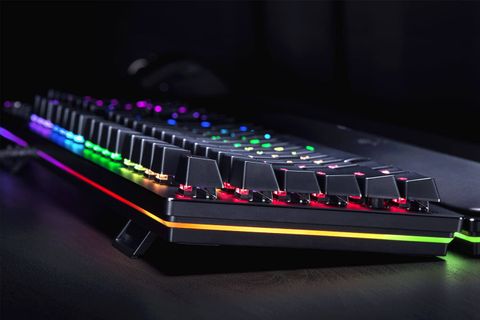 As the newest addition to Razer’s keyboard lineup, the Razer Huntsman Elite aims to bring a new height to performance mechanical gaming keyboards. But unlike all of Razer's keyboards before it, it’s equipped with something special: a brand new opto-mechanical switch.

The second nifty part about the opto-mechanical switch is its physical design. Despite being a clicky switch, the mechanism used to generate the click is completely decoupled from the switch’s actuation mechanism. This is a key feature, as it eliminates the hysteresis problem present in the Cherry MX Blue switch and its clones. Hysteresis occurs when the reset point is located above the actuation point, which forces the user to let the key rise further before it can actuate again. This can make rapid tapping difficult.

With the opto-mechanical switch, Razer has reduced the distance between the actuation point and the reset point to nearly 0mm, ensuring consistent switch behavior in both directions of travel. Each switch also has its own stabilizer bar to reduce key wobble.

Razer’s opto-mechanical switch is practically identical to the Bloody LK Libra switch, revealed earlier this year. Razer told me that they although they share the manufacturing partner, it has a very stringent QC process to ensure the switch’s quality. To my fingers, the opto-mechanical switch feels absolutely phenomenal. I’ve always enjoyed typing using the clicky Cherry MX Blues, but its heavy 60g actuation force can be strenuous on the hands. Razer's switch reduces fatigue with a feathery actuation force of just 45g, yet still provide the crisp, tactile feedback I’m so in love with. It also features a slightly lower-than-standard 3.5mm total travel and actuates at just 1.5mm. Because there’s no hysteresis, gaming and spamming on the Huntsman Elite feels more consistent, natural, and responsive.

The Huntsman Elite is equipped with Cherry stabilizers, perhaps as a means to avoid adding any more noise on top of the already loud switches. They’re very responsive. I do appreciate the relatively silent clacking of the spacebar since I spam it a lot in StarCraft.

It’s clear that the new switch construction works beautifully, but the stabilizer bar feels like a gimmick. It doesn’t reduce key wobble all that much compared to a standard Cherry MX switch. To test out whether it has a purpose, I asked a friend to remove the stabilizers on a random set of keys. After hammering out a page of text using the altered keyboard, I was unable to pinpoint which ones had the bars removed.

I’ve always appreciated the Razer BlackWidow Chroma’s comfortable wrist rest and I’m glad to see the same design being applied to the Huntsman Elite. Cupped inside its durable case is a block of soft, pleather-covered memory foam. If it was larger, you could use it as a pillow. The wrist rest attaches via magnets at the bottom edge of the keyboard and is gripped in place using six rubber feet.

The dial at the top right corner of the keyboard is another bit of smart design. It’s pronounced enough to be used comfortably, yet subtle enough not to throw off the board’s sleek aesthetics. Its function isn’t restricted to just adjusting volume; you can customize it to perform a set of pre-programmed functions like adjusting zoom in Microsoft Word, changing music track, and even swapping weapons in games. Though I enjoyed the convenience it offered in controlling media, I didn’t find it practical in games as it required me to take my hand off of my mouse.

The Huntsman Elite's feature list ends at dedicated media controls. It isn’t outfitted with macros or USB passthrough, common feature on high-end gaming keyboards. The lack of passthrough is especially disappointing since the keyboard can hog two USB ports. You actually only need one plugged in for the keyboard to function; the second port is used solely to power the light rings on the underside of the chassis and wrist rest. If you have an abundance of free USB ports, definitely activate both lights; the RGB illumination is even and gorgeous.

The Razer Synapse software used to customize Razer's products could use a diet. Over the years, Synapse has grown into a bloated 240MB download. As feature-rich, intuitive, and functional as it is, it’s about as responsive as a sedated sloth. Cycling through the tabs is laggy, and some settings take a while to respond to changes.  With that said, I must admit that it’s easy to use. I especially like how you can outline an area on the keyboard and apply a different lighting effects to that region. The new Hypershift function temporarily unlocks a secondary set of functions at the touch of a button, giving me convenient access to a few custom hotkeys.

I never thought I’d encounter a clicky switch that could dethrone a Cherry MX Blue, but Razer’s opto-mechanical switch has done just that, though at a premium price. Coming in at $199.99, it’s an ostentatious option reserved for deep pockets. If you can forego the wrist rest and media controls, you can score the Huntsman for $149.99. Still expensive, I know, but these switches are just that good.