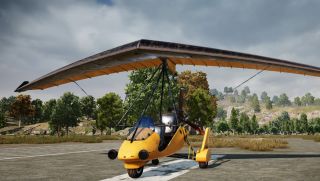 Welcome to our guide to all of the PUBG glider spawns. One of the key risk/reward choices you need to make in any battle royale game is whether you're happy to cover long distances if that means alerting your remaining rivals. Now that the new Motor Glider has arrived for PUBG season 6, that gambit is even more acute.

That's because this bright yellow beast is loud, but you may need to make a last-gasp choice to get yourself out of a hot zone or an area at risk of being consumed by The Circle—if you can reach the necessary speed of 70km/h to take off. You must also fill the engine before it's started, so you'll need to hold your nerve. That said, it helps that the PUBG Motor Glider is a two-seater: one of you can pilot the thing with another providing covering fire.

But even if you decide to take the risk on piloting a Motor Glider, you'll need to know where you can find them. So, to rain down battle royale death from above, here's how many PUBG glider spawns there are, and where they're located.

How many PUBG glider spawns are there?

After a period of testing of the new vehicle, the number of locations in which you can find the glider has decreased. Originally, according to PUBG Labs, "we used to have 10 motor gliders spawned in 10 spawn locations, so 100% spawn rate on each location."

In other words, the glider spawn locations were effectively fixed, but now, once you approach a spawn point, it has a 25 percent chance of appearing now that the glider has transitioned to the live game: "We'll be changing this to 10 gliders randomly spawned in 40 spawn locations." That said, expect more testing, and potential spawn tweaks, to continue.

Thanks to PlayerIGN we know know the locations of all the glider spawn points. In the tweet above you can see the 40 each on Erangel and Miramar, the only two maps to feature the vehicle so far. Remember though, even if you are near one of these spots, there's only a 24 percent chance it'll be there right now. If you're lucky, buckle yourself in and enjoy an airborne chicken dinner on me.