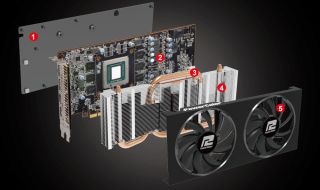 Sometimes good intentions can backfire. That was the case when AMD pushed out a last-minute BIOS update to its hardware partners so they could goose the clockspeeds on custom Radeon RX 5600 XT graphics cards, thereby making them more competitive with Nvidia's GeForce RTX 2060 (which had received a price drop). This has led to confusion over the actual specs, particularly with regards to the memory. In light of this, PowerColor is offering some clarity on the situation.

I'll get to that in a moment, but first let me recap what happened. AMD announced the 5600 XT at CES 2020, where it pitched the card as a $279 offering capable of besting the GeForce GTX 1660 Ti at 1080p gaming.  Not long after, EVGA announced two new KO (knockout) editions of the RTX 2060 starting at $299, prompting speculation of a price drop. Sure enough, Nvidia followed suit by slashing its Founders Edition model to $299, making the price cut official.

Performance between the 5600 XT and RTX 2060 is mostly a tie, with a slight edge going to the latter (depending on clockspeeds). Combined with a support for real-time ray tracing, one could argue the RTX 2060 is a better value, for just $20 more.

This is undoubtedly what prompted AMD to provide its hardware partners with new firmware code, allowing them to flash their 5600 XT cards to run at faster clocks. However, there are two issues with this. One is that all of the initial batch of cards were already in the hands of retailers with the original specifications. This left add-in board (AIB) partners scrambling to release BIOS updates of their own for buyers to flash their cards at home. It's not ideal, but it's better than being stuck with a slower card than everyone else.

The second issue is the memory speed. While goosing the GPU clock is rather easy by way of a firmware flash, many of the initial 5600 XT cards shipped with 12Gbps memory, which sticks to AMD's reference blueprint. BIOS updates can enable running the memory at 14Gbps, but as MSI pointed out in a recent episode of MSI Insider, not all memory chips are validated to run at the faster speed.

Most of the 5600 XT card that were sent out for review had updated BIOSes with faster clocks and faster 14Gbps memory. However, if you buy and flash an early 5600 XT card, if the memory stays at 12Gbps, you won't see the same performance results. MSI is erring on the side of caution by not touching the memory speed with its BIOS updates, and instead plans on releasing a specific model (5600 XT Gaming Z) with 14Gbps memory next month.

This brings us back to PowerColor. Responding to a tweet by The Tech Report on MSI's comments, PowerColor said its 5600 XT cards all use memory rated to run at 14Gbps.

"MSI says that some GDDR6 chips can handle the faster speeds, while others cannot." Our 5600XT cards have GDDR6 14Gbps rated memory modules as such it's running within spec.January 30, 2020

"MSI says that some GDDR6 chips can handle the faster speeds, while others cannot. Our 5600 XT cards have GDDR6 14Gbps rated memory modules as such it's running within spec," PowerColor tweeted.

I found this curious because on PowerColor's website, its stock 5600 XT model (AXRX 5600XT 6GBD6-3DH/OC) lists 12Gbps memory in the specifications section. I reached out to PowerColor to ask if that meant the memory on that card can run at 14Gbps, but is clocked slower because it's a reference model. The answer basically amounts to 'sort of.'

"Our Stock model 5600 XT follows AMD's reference specs but we share [the same] memory modules as Red Devil and Red Dragon. You would ask why we don't run at 14Gbps then—the reason is Red Devil and Red Dragon have a higher PCB layer count, 10 versus 8 found on the stock 5600 XT, which means the memory signal is much cleaner and stable with our premium models. Having a 10 layer PCB is important to the higher clocks on the GDDR6 14Gbps memory," PowerColor said.

In other words, PowerColor's stock 5600 XT is in fact using memory chips validated to run at 14Gbps, the same as found on its Red Devil and Red Dragon variants, but still might not be able to run at that speed because of the lower cost and lower quality printed circuit board (PCB) design.

It's kind of odd that PowerColor chose to counter MSI's statement, because the end result is the same—5600 XT cards with 12Gbps memory are probably not going to get flashed to 14Gbps, whether it's because the memory chips are not validated for that speed, or due to the PCB. And circling back to the original point, this is why a last-minute BIOS update for a graphics card is both highly unusual and also problematic.