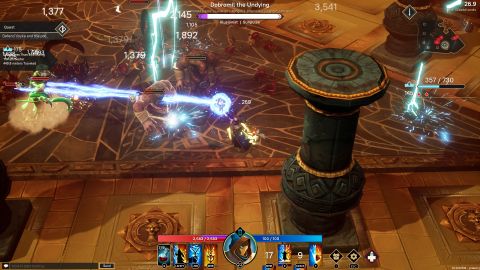 Fun hero designs and solid combat offer a promising start, but it needs to shed its grind and borderline game-breaking bugs.

To play Pagan Online is to grind. Grind hero levels. Grind hero shards. Grind rare monster drops. Most action-RPGs are comfortable with a certain amount of grind and wear it proudly, but Pagan's unlockable heroes and micro missions reek of a free-to-play game yearning to suck as much time and money out of me as possible (even though it isn't free-to-play), holding back an otherwise fun experience.

I started with Kingewitch, a classic barbarian with whirlwind and leap attacks and a name I'm still not sure how to pronounce. Heroes are controlled using WASD and the mouse, creating a twin-stick shooter feel that's becoming increasingly popular in modern action-RPGs.

In every mission, whether continuing the lengthy campaign or jumping into a one-off, I spawn into a bite-sized map made up of mostly linear hallways and battle a series of monster waves. With the mouse and keyboard movement and a dedicated dodge skill, the combat is more active and arcade-like than more traditional Diablo-likes. There's also a small windup time for many skills, forcing me to pay close attention as enemies can knock me on my ass when I miss, leaving me in a bad position with a skill on cooldown and a wounded pride.

Enemies tend to spawn in large numbers, sometimes filling the screen with minions dying to get a taste of my meteor blasts, lighting runes, and blood tornadoes. Unfortunately, playing a ranged hero who could swiftly kite enemies and avoid ranged projectiles always felt better than trying to wade into the horde with one of the bruisers.

Each mission takes only a few minutes, capped by a final boss fight. I appreciate the quick loading times and immediacy of the action, but constantly warping to and from tiny missions fails to create a cohesive world, and serves as an excuse to re-use the exact same layouts and maps using slightly different paths (or the same in reverse). Even the campaign, while gifted with surprisingly great voice acting and cheeky melodrama, largely consists of the same disjointed maps and missions.

Monsters vary enough to make replaying the same few desert, forest, and snow maps bearable. Ghostly spectres whirl their chains, armored siege beasts charge across the screen, and sandbugs curl into balls and circle me, waiting to dart in. As with most action-RPGs normal difficulty is a walk in the park, but things get far more interesting after switching to harder difficulties, which demand more attention to positioning and resistances and a well-balanced loadout.

After the prologue events of the singleplayer campaign, I'm stripped of all my abilities and sent to Pantheon, the heavenly hub town of Pagan Online. Within the first few missions I collect a blacksmith, a vendor, and a snake-lady who grants access to my skill tree.

When it comes to skills, Pagan Online leans more towards Diablo than Dota, offering several different skill options and talents. Every level grants a skill point, which can be used to improve (or unlock) a skill, or unlock new skill tree nodes which can boost power, range, duration, or add entirely new effects, creating some interesting synergies and allowing me to focus on my favorites. Morokh, a scythe-wielding grim reaper, can specialize his teleporting Harvest skill to deal double damage to feared enemies (courtesy of his Horrible Visage skill). Hector's flamethrower can be improved to cause dead enemies to explode in a gloriously gory chain as I cackle with gleeful memories of Diablo 2's corpse explosions.

Experimenting with different heroes and skill combinations is the best part of Pagan Online. Instead of starting over with a new campaign, heroes are persistent across my account, and I can easily switch them in and out while at Pantheon, quickly swapping gear with the shared stash. Earned experience from each hero adds to my overall Legacy Rank. It's a dream come true for us alt fiends.

Unfortunately, unlocking additional heroes is a total pain—a leftover from free-to-play MOBAs that shouldn't have been included in a buy-to-play action-RPG. Heroes are unlocked by completing assassination missions, which are in turn unlocked by grinding out keys and random monster drops in missions, which can take an annoyingly long amount of time. Assassination missions also drop hero shards, which are used to unlock new costumes. All outfits are tied to these hero-specific shards instead of the actual loot I'm picking up—another bad design choice for a loot-based game.

During Early Access, heroes were unlocked in a certain order, but for the full release assassination missions now award a hero soul upon their first completion, letting me at least unlock whichever hero I want next. These choices are critical, as later missions and thus heroes are much more time-consuming to unlock.

It's a shame unlocking new heroes is more complex than it needs to be, as Pagan Online does a great job encouraging me to play different heroes by eliminating item level restrictions and granting significant XP boosts to any hero below my highest-level one. I often chose my heroes based on which rare character-specific weapon drops I found. I could gain 20 levels in just a few hours by giving them ridiculously overpowered equipment. Pagan Online takes power-leveling to new heights.

Action-RPGs are usually great co-op games, but Pagan Online strangely diverges, offering one of the weakest multiplayer experiences I've seen in the genre, despite having 'Online' in the title. The entire campaign is singleplayer only, with online multiplayer limited to one-off missions for two players. It requires a constant connection to its servers no matter what, creating the worst of both worlds.

I was also hampered by some nasty bugs. Twice my stash was completely deleted, a terrible ordeal for a loot-based game and almost game-breaking. I had certain skills not work at all, particularly summons, for entire missions, and occasionally the voice audio would completely cut out during campaign levels.

The core combat remains engaging and fun, and swapping between different heroes and loadouts is a blast, but Pagan Online is impossible to recommend without several caveats: the bugginess, the hero grind, and the limited multiplayer.

Fun hero designs and solid combat offer a promising start, but it needs to shed its grind and borderline game-breaking bugs.