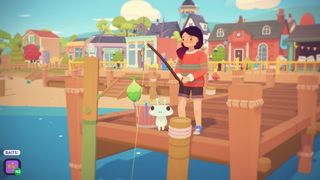 The cute farm sim-RPG Ooblets has been in development for a few years now, with no real sign of when it might actually be released. A publishing deal with Double Fine was announced shortly after it was revealed, but that fell apart when Double Fine was acquired by Microsoft. Developer Glumberland then decided to self-publish as an Epic Games Store exclusive, which it said at the time would speed up development in the long run but might actually delay the initial launch, "because it takes some time to ramp things up."

Ooblets continues to sit on the Epic Games Store with a release target of "coming soon," but even so, we boldly included it in our list of this year's most anticipated games, saying that its "charm and cuteness will most certainly be a highlight of 2020." And it looks like we were right.

"I don’t want to get you excited, but ¡GET EXCITED! because 2020 is the YEAR OF THE OOB," Glumberland wrote in its January development blog. "It’s been foretold in the prophecies/milestone calendar. That’s really all I can say about that right now so feel free to draw all sorts of wild conclusions."

That's actually not the biggest news in the update, according to the developers. The really big news, apparently, is a new activity called "Sea Dangling," which as far as I can tell is basically fishing, minus the fish.

Finally added the thing everyone's been clamoring for since forever...SEA-DANGLING pic.twitter.com/dRMw9sLwxJFebruary 1, 2020

"We didn’t know there were so many sea-dangling enthusiasts but apparently it’s a whole big thing. The concept ended up working out really well in Ooblets since as you all know sea-dangling doesn’t involve hurting any animals," the studio wrote. "The whole thing is tied to a new Reconstitooter system that repurposes other materials and outputs bait that you can use to sea-dangle with."

The badge system has been changed so that instead of having to track down the Mayor to get your badge after unlocking it, which "sorta made sense narratively but was a huge pain," the Mayor will now send an Ooblet to deliver it to you as soon as it's earned. There are also a bunch of new animations, "mystery can piles," new dance moves, some lore, and "boring stuff" like balancing.

"Our next big tasks are getting the Mamoonia region in a decent state, fixing up oobcoops, adding a lot to clubhouses, adding a disposable card system, and putting in more lore items," Glumberland said. "It’s gonna be another very busy month!"