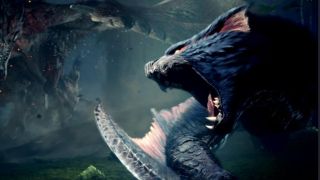 Nargacuga has been a fan favourite ever since its appearance in Monster Hunter Freedom Unite for the PSP. With its glowing red eyes, jet-black fur, lightning-fast attacks and deadly barbed tail, Nargacuga can quickly take down even the most experienced hunters. While this iconic beast may not be as big as Iceborne’s other monolithic creatures, it still boasts a tremendous amount of power.

Nargacuga is known for its incredible agility, cautious nature, and terrifying rage mode that often leaves sluggish players in the dust. Nargacuga’s strong leg muscles allow it to jump long distances and effortlessly traverse harsh terrain, making it a real nightmare to deal with when you’re trying to successfully capture it.

Keeping up with Nargacuga’s agile movements can be rather frustrating, so if you find yourself struggling to survive against this deadly Flying Wyvern or simply want some tips for taking it down, then be sure to check out our monster guide below.

While Nargacuga may be classified as a Flying Wyvern the majority of its moves are tailored towards ground-based combat. Nargacuga can also unleash a volley of barbed spikes directly in front of it, causing tremendous damage and inflicting hunters with Bleed.

When enraged, Nargacuga’s tail spikes will start to protrude and its eyes will glow bright red. During this enraged state, the panther-like wyvern’s speed is heightened and its attack patterns become more sporadic in nature. While the added aggression and overall lethality of Nargacuga’s enraged state may prove difficult to handle, it’s the only time you’ll be able to cut off the beast’s tail, so make sure you take note of this hyper-aggressive form if you wish to claim an extra carve.

How to beat Nargacuga

The majority of Nargacuga’s moves are centred around its bladed wings and barbed tail, which it uses to deliver blisteringly-fast slashes and fatal tail slams. These attacks appear to be sporadic in nature at first, however, they do offer brief windows of opportunity for keen-eyed hunters to lay down some deadly punishment. For example, Nargacuga’s tail slam may deal tremendous amounts of damage, but if you manage to dodge it, you’ll be able to unleash a flurry of attacks while Nargacuga desperately tries to free its tail from the ground below. This move is easy to dodge, so be prepared to roll out the way whenever Nargacuga raises its tail in the air.

To make matters even better, you can also knock over Nargacuga by slinging a Screamer Pod at it just before it’s about to jump. Simply launch the Screamer Pod whenever Nargacuga enters its poised state and watch as the beast topples over. Not only will this give you plenty of time to dish out uncontested damage, it also forces the Flying Wyvern into its enraged state, giving you more opportunities to cut the tail off. In order to successfully cut the tail, you’ll first need to break it, then physically hack it off with non-blunt weapons during its enraged state. Cutting off Nargacuga’s tail should be a top priority for any hunting party aiming to increase their rewards, while it also helps reduce the beast’s overall attack range.

Make sure you pack either Astera Jerky, Sushifish Scales or Well-Done Steaks as Nargacuga’s ranged tail spikes inflict hunters with the Bleeding status effect. This nightmarish effect causes hunters to take small amounts of damage when moving, attacking or dodging. If you don’t have the items needed to stop the bleeding, then you’ll be forced to crouch and remain completely still until the effect wears off. Even if you’re absolutely certain you’ll never get hit by Nargacuga’s spikes, I still recommend bringing the items listed above to stave off any frustrating deaths—after all, even the most experienced hunters are allowed to have a bad day.

The agile nature of this fight may put a lot of hunters off from using Iceborne’s more sluggish weapons, but don’t pack away your Great Sword just yet. The Ancient Forest is home to all kinds of environmental hazards that you can use to incapacitate your foe, so look out for the various Vine Traps, Paratoads, and Suspended Boulders that are scattered around the arena. Catching Nargacuga in any of these traps will give you the time needed to unleash your flashy charged attacks and knock out hits, making the fight a lot more manageable for those who prefer to use Monster Hunter’s heavier weapons. Consider bringing a few Pitfall (only works when enraged) and Shock traps (works all the time) and lay them down whenever the beast is exhausted to maximise their effectiveness. While there is no wrong weapon to use against Narcuga, we recommend that you bring either a Thunder or Fire weapon to capitalise on its elemental weaknesses.