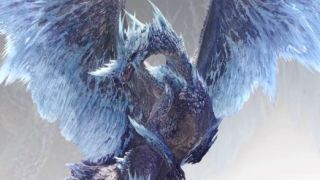 Velkhana is one of the latest monsters to join Monster Hunter’s famed Elder Dragon list and hunters will need to exercise caution if they wish to avoid a frosty death. This icy Elder Dragon uses its immense power to control and bend the chilly elements, delivering glacial blasts to all those that dare to oppose it.

In order to claim a successful victory over Iceborne’s flagship monster, you’ll need to avoid a combination of ice-based ranged attacks, deadly AoE effects, and a flurry of lethal tail jabs. For many hunters, Velkhana will prove to be a difficult fight and one that will require skill and patience to overcome—after all, this frozen beast is capable of wiping whole parties in mere seconds. We have a few tips to help you through.

While background information surrounding this mysterious Elder Dragon is rather scarce, we do know that Velkhana has a deep affinity towards the ice element. Velkhana spends the majority of its time in the sky, preferring to bombard its prey with icy ranged attacks rather than engaging foes head-on.

These frozen projectiles and AoE effects inflict hunters with Iceblight, causing them to consume stamina much faster when moving and attacking. Not only does this make avoiding Velkhana’s subsequent attacks increasingly difficult to avoid, it also forces hunters to play a lot more defensively until the blight is either cured or wears off. In addition to Velkhana’s ice breath, frozen mist, and various glacial projectiles, this terrifying Elder Dragon can also summon walls of sheet ice that can quickly force you into fatal situations if you’re not careful.

The sheer power and volume of Velkhana’s icy attacks may seem intimidating at first, but with a little practice, you’ll be exploiting and avoiding them in no time. Before you go venturing out into the frozen tundra in pursuit of victory, I recommend packing a few things to help with the fight ahead. Firstly, make sure to stock up on Nulberries as this consumable item enables you to instantly cure the Iceblight effect that is present on Velkahana’s glacial attacks.

Even if you think you can comfortably dodge the majority of these moves, it only takes one mistimed dodge to be hit with an icy blast that can spiral into an early demise. As a result, it’s often best to deal with Velkhana’s Iceblight before it poses a real threat.

Lastly, ensure you equip the Iceproof Mantle to help reduces Velkhana’s ice damage and nullify the effects of her blight effect. While these two items won’t win the fight for you, they will make dealing with Velkhana’s chilly attacks a little easier.

Velkhana’s overall range and AoE abilities may seem frustrating to deal with at first, especially when you’re trying to learn her moveset, but there are plenty of opportunities where you can turn her aggression against her. For example, when Velkhana’s frozen walls break, they can actually be used as platforms that enable you to launch aerial attacks.

This is particularly useful if you’re trying to mount Velkahana and force the beast to plummet into the ground below. Once you’ve successfully toppled Velkhana, be ready to unleash a volley of attacks on its spear-like tail in order to tear it off and help nullify its potency. When Velkhana is readying its Ice beam, make sure you stay behind its forelegs as you’ll be able to keep away from the beam’s radius and safely unleash the bulk of your damage without getting hit.

However, there are certain moves that you must keep away from at all costs. One such move is Velkhana’s AoE ice blast which sees the Elder Dragon fire a jet of ice into the terrain below, causing shards of ice to come shooting out from the ground in a wide circle. When you see Velkhana ready this attack, be sure to keep well away to avoid being sent back to base camp. Just like most beam-based attacks in Monster Hunter, Velkhana’s ice laser can be dodged by diving through it, so be prepared to hurl yourself to ground if you happen to get caught in the firing line.

While Velkhana’s Elder Dragon classification may make it immune to conventional traps, it can still be incapacitated via environmental hazards. When fighting Velkhana in the Elder’s Recess, try luring it under the suspended boulders in area eight of the map. This will not only deal a huge amount of damage, it will also give you plenty of time to land meaty hits onto its tail and head, increasing your chances of breaking certain body parts and even outright KO’ing the monster. However, if you’re looking to increase your overall DPS and cut down those lengthy kill times, I recommend that you bring either a Fire or Dragon weapon to capitalise on Velkhana’s elemental weaknesses. If you follow the tips outlined above, you’ll be able to slay this Elder Dragon in no time.