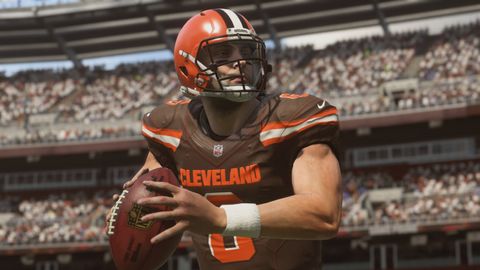 Madden 19 offers a fascinating single-player story, but the rest of the game largely falls into the same tropes you experienced a decade ago.

It is wonderfully ironic that Madden is finally exploring its spiritual side in 2018, when the cultural discourse surrounding the NFL is in a state of decay. The anthem protests, the Trump tweets, the lingering albatross of the concussion lawsuits, a commissioner who has made it abundantly clear that he doesn't have the answers—this is the context that colors Longshot: Homecoming, the sequel to Madden 18's shockingly lauded story-based singleplayer campaign. We once again catch up with Devin Wade and Colt Cruise, who continue to pursue their NFL dreams while also rekindling a connection with the high-school football culture of their hometown, Mathis, Texas. It pleads with us to remember an aging aphorism of Americana: that football is family, and community, and harmony—the exact opposite of what dominates the ESPN ticker every day.

And so, EA avoids all those tough questions by telling its Football Story through the heartland warmth of Central Texas, with the archetypical Socratic coach, the homebrew BBQ sauce, and the deadbeat father who's rediscovered the important things in life all in tow. Like last year's entry, Homecoming plays out in a series of teleplays, which are each punctuated with brief spurts of on-field play that serve as a tutorial for the basic functionalities of the gridiron. Also like last year, it's well-performed, poignant, and effective if you, like me, still want to love and believe in football. Perhaps that gullibility is sinister, given all the dysfunction that's tearing this league apart. But at the very least, I do think Madden offers a compelling fantasy.

Madden 19 is the first time the series has come to desktops since Madden 08. If you somehow dropped out during the intervening years, and are worried about not being able to catch up with the mechanical changes that have gestated in the meantime, let me put you at ease. The basic grammar you remember from the PS1 days, or the PS2 days, or the PS3 days, or the PS4 days is still intact. The B button will let you perform a spin move. The Y button hurdles. You juke and hesitate with the right stick. When a quarterback drops back to pass you're presented with a menu of wideouts and tight ends, each with a floating button above their head. Your playbook still contains standbys like Four Verticals and HB Toss Weak. It's still cheesy to call a Hail Mary, roll out with a mobile QB, and scramble up the cleared-out hashes for easy yardage.

This is how it should be. Madden is perhaps the most ubiquitous of all American videogames, and I understand why EA Tiburon resists the urge to rewrite the calculus every year. It makes it so that I, someone who has not spent any significant time with a Madden game since 2014, can sink right in without much trouble.

As a peace offering to any dejected hardcore PC gamers, you can pilot this year's offering with a mouse and keyboard (you direct your players around the field by pushing your mouse in the designated direction, like a 'virtual joystick'). But like other games built with a console in mind, you're best off digging out that old 360 controller.

We're a little disappointed that Madden 19 doesn't have remappable controls, but aside from that, we've found that it runs well, and there are lots of graphics and gameplay options. For more on all that, head to our performance impressions.

As is customary, Madden 19 is stockpiled with a highly marketable list of new content, which is primed specifically for that midway point during EA's E3 press conference every year. However, the window dressing this time out seems particularly sparse. A considerable amount of emphasis is put on "real player motion"—a fancy way of saying the models are better animated—which EA claims better replicates the product on TV. The game looks good and it ran well on my laptop, I'll give 'em that. The hitchiness on the line of scrimmage is replaced with a smoother sense of chaos, with tackles dovetailing into gang tackles and back into broken tackles. The players also seem to cut and change direction in a twitchier, more sensitive way, which took me some time to internalize. As always the higher strategies of football academia is put on the backburner; you can easily make due by calling the plays the game suggests, paying no attention to the geometry of a Cover 2. If all you're looking for is some exhibition matches with the boys, consider that a ringing endorsement.

However, to be clear, this is the same promise EA puts forth every season—I've lost count of the number of times Tiburon has tried to sell their NFL game by claiming that they've finally solved the uncanny valley issues that's always dogged its engine. I am glad that they are chipping away at those things, but this is still not the urtext of football, nor will it ever be. It's illuminating that one of the flashpoint additions this year is the reintroduction of touchdown celebrations, which the NFL decriminalized last year. Now, when you score, you're given the option to perform any number of viral dances to punk the opposing squad. It's nice, it's fun, and it's also kinda weird that it's getting back-of-the-box real estate.

Tiburon's reliable Franchise Mode returns once again, for all of your amateur General Management fantasies. It's a particularly fun year to mess around with the sim, given all the intriguing new quarterbacks entering the league (for the first time in a while, it's actually kinda fun to rebuild the Browns). The format itself is also simpler from what I remember in previous Maddens; you can highlight a few players to develop each week, you can scout an offensive and defensive scheme to counter whoever you're playing on Sunday, and the depth chart is remarkably easy to alter. When I think about how hairy and antisocial hardcore baseball sims like Out of the Park can get, it makes me appreciate how Madden understands its audience enough to scale things back. When it comes down to it, I'd rather have 10 things to do every turn, rather than 10,000.

If you're a masochist, you can jump onto the endlessly profitable Madden Ultimate Team server, in which EA morphs its football game into a CCG. Ultimate Team offers an addictive module where you slowly but surely acquire better players from either a player-run auction house, or shrink-wrapped packs of virtual cards that can be purchased with real money. It's cool, like the ultimate incarnation of a fantasy football league, but as someone who already has a debilitating Hearthstone leak, it's never been my scene. We've all got our vices, right?

So that's where we find Madden in 2018. A fairly bare-bones installment that still delivers the things that people love about the game to players on PC. Longshot remains the crowning jewel: the artistic, vulnerable argument for football that justifies the trademark clinical texture of the surrounding aesthetics.  I imagine that this will be Tiburon's formula for the foreseeable future: Madden as you know it, with a sprinkling of American mythology to remind you why you've stuck around.

Madden 19 offers a fascinating single-player story, but the rest of the game largely falls into the same tropes you experienced a decade ago.