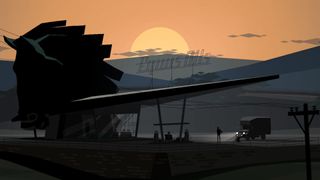 I bought Kentucky Route Zero years ago as a result of pretty much everyone telling me I needed it in my life. They weren't wrong. But after playing a bit and loving it, I decided to put it down until the launch of the final episode. Now it's the End of Days and my hair is grey, but at least Act V is almost upon us. It's coming today, seven years after the first episode launched.

Hopefully it will be worth the wait, and if your memory has grown foggy over the better part of a decade, give yourself a refresher with our Kentucky Route Zero review, which covers the initial act.

"Kentucky Route Zero funnels you along a prescribed path, sparsely populated with commands and with little room for maneuver," wrote our former deputy editor Philippa Warr. "But there's considerable beauty in how it acknowledges these limitations and asks what sort of game choices are really the most important. Other adventures see you decide a character's fate, their successes or failures. Kentucky Route Zero makes a point of asking you to describe their interior instead—and, by extension, yourself as well. However you respond to its ethereal imagery, this is a game which makes a rare suggestion: who a player is may be more important than what they do."

It's a miracle when I remember to put on trousers, so tasking me with remembering much from Kentucky Route Zero is expecting a lot—I'll probably be starting from scratch. I really should have started last week, to be ready for today's launch, but I'm at the mercy of at least five other games right now. Soon, though, I'll finally finish it.