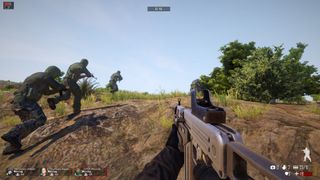 Insurgent shooter Freeman: Guerilla Warfare has rolled out official mod support, say developers KK Game Studio. Along with a functioning Steam Workshop, KK has released a rather bombastic trailer showing off what can be done with the modded game. Naturally that includes both historical scenarios, which makes sense given the game, and Anime Girls, because that is what every game with mods gets eventually. I am sure those mods make lots of people happy, but there are a lot of them and I recognize only about 5% of the characters.

Freeman: Guerilla Warfare is generally described as "What if Mount & Blade, but guns?" and according to its Steam reviews pretty much delivers on that concept. It released earlier this year after a stint in Early Access. Our Chris Livingston tried it during the Early Access period and noted that it departs from the Mount & Blade formula by adding a layer of RTS-like tactics to its combats.

The Steam Workshop for Freeman currently has just a single mod, an official bit by the developers adding the 1937 Second Chinese-Japanese War. Official modding tools are "coming soon" according to the developers. The mod is also on ModDB and Nexus.