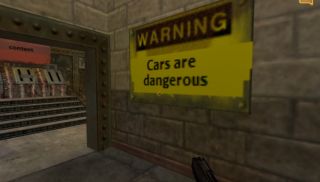 Google Translate is the greatest poet of our age, capable of turning the most mundane sentences into evocative prose. At least once you've run the text through different languages a few times before translating it back into English. That's what modder SausageEggs did for all the dialogue and text in Half-Life. The result is magical.

Pretty much everything has been warped by Google. Warning signs, dialogue and and even the UI now displays very confusing gibberish. For the dialogue, SausageEggs re-recorded the audio with some help, so security guards and scientists will now happily spout complete nonsense at you.

The dodgy translations still retain some of their original meaning, so dialogue can start off making sense before it veers into the surreal, like this gem from the security guard at reception.

"They were having problems in the exam room, but it feels like I am taking a shower."

We've all been there. Other security guards offer important advice.

"Well, hi! Eat your polio from space," one wise science cop reminds Gordon. Speaking of Big Gordo, he's called Cicero in this edition. Cicero is, of course, Latin for Gordon.

SausageEggs was inspired by Fatguy703's Book of Mario series, which uses Google Translate to make the Paper Mario games a wee bit weirder. You can see the result of that on his YouTube channel.