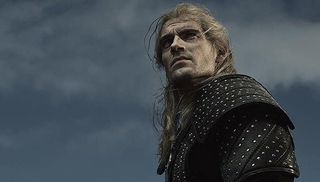 When Henry Cavill was announced as the star of Netflix's The Witcher series, I had some doubts. Could the chiseled, clean-cut actor best known as Superman really portray the grizzled, rough-edged monster hunter Geralt? The situation has improved dramatically since then, though, as newer images of a properly dressed-and-made-up Geralt have made the White Wolf of TV look very sharp. Now, courtesy of Redanian Intelligence, we've got another one to lay eyes on, and Cavill continues to (somehow) look right for the role.

For those not in the know, videogame Geralt carries two swords, one steel, for messing up humans, and the other silver, which is more effective against monsters. This appears to be his steel sword: The hilt looks the same as the one he's swinging around during a brawl in The Witcher teaser trailer, while the sword he's holding while facing off against the giant spider at the end of the video has (as far as I can tell) a straight guard.

Most of the images from the Netflix series have only shown Geralt carrying one sword on his back while in the games he carries both, but according to this Reddit thread from a few years back (via Tor), in the novels he usually travels with just the steel blade at hand, and keeps the silver sword stashed away for special occasions. Netflix has previously said that the series will not adapt the games, so the visible presence of just one sword makes sense.

Netflix's Witcher website doesn't list a release date for the series, but Netflix Netherlands accidentally blew the surprise a couple of weeks ago, revealing (unofficially for now, but close enough to count) that it will air on December 17.