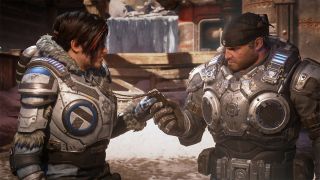 Update: There's still no word from Microsoft or The Coalition about the "specific issue" that prevented Gears 5 sales in China, but whatever it was, it's been solved. "We are pleased to announce that Gears 5 is now available in Mainland China. All existing pre-purchases will be honored and added to your Steam account," TC Octus wrote in a new message posted to the Steam forums. "Thanks for your patience."

I've reached out to Microsoft to ask again about the specifics of the delay, and will update if I receive any more information.

Gears 5 is set to come out on September 9, but it appears that gamers in China may have to wait awhile to get their hands on it. A message posted on Steam by community support manager TC Octus says that an unspecified problem has forced the developer to suspend all sales and the game's launch in that country.

"There is a specific issue with the Gears 5 release in China preventing people from accessing the complete game. Unfortunately, this issue means we have to suspend future sales and pre-orders, as well as the game’s release, in China at this time," it says. "We are investigating and will provide an update once we have more information. We appreciate your understanding."

There's no indication as to what the issue might be, but it appears to be unrelated to server issues that some players were experiencing yesterday, when the game went live for Xbox Game Pass Ultimate subscribers. TC Octus told Twitter followers numerous times that issues with matchmaking and missing content are the result of overloaded servers, which developers are getting straightened out.

FYI. We are already seeing server stability improvements and the team are all over getting it to 100%. Thanks for your patience, huge influx of players coming in! https://t.co/xeqt110TlgSeptember 6, 2019

But the Steam version isn't live yet, and recent comments on the delay pretty strongly suggest that nothing more has been said about it since the initial announcement.

Releasing games in China can be a dicey proposition. Censorship is an issue, but so is uncertainty: Steam is unsanctioned by Chinese authorities but remains available and widely used, even though nobody seem to know exactly why. Potentially throwing things into even further disarray, Valve is working with Perfect World to launch Steam China, which will be officially approved and operate "almost entirely independent of Steam" elsewhere in the world.

I've reached out to Microsoft to inquire about the delay and will update if I receive a reply.