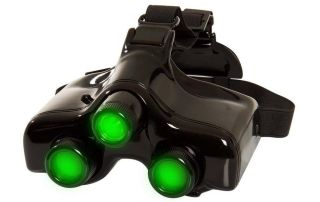 The Splinter Cell rumor machine cranked over again today courtesy of Gamestop, which is now selling replica Splinter Cell Goggles for $40. The "ultra-realistic" rig features "iconic lights and sounds from the videogames," and yes, you can strap it to your melon and walk around in public if that's your thing. Expected to ship November 1, four AAA batteries required, not included.

That in itself is not a big deal—Gamestop sells collectibles from a number of different games series—but the first line of the product description might be: "For the first time since the introduction of Splinter Cell in 2002, after nine top selling AAA+ titles, and with the 10th release on the horizon, this is your first chance to own Sam Fisher's signature Ultra High-Frequency Sonar Goggles."

Have their actually been nine big-budget Splinter Cell games? That seems like a lot. Wiki lists seven:

The Wikipedia listing for Sam Fisher notes that he's appeared in two other games, Ghost Recon: Wildlands and Far Cry: New Dawn, so maybe that's where Gamestop got the number. But whatever—the important point is the bit about another game being "on the horizon."

That's very vague, and I'd be a little surprised if Ubisoft announced a new Splinter Cell while rolling into a crowded holiday season. But it might be an interesting way to build hype for Ghost Recon Breakpoint (or maintain it post-launch) and assuming the new game wouldn't be ready until the 2020 holidays, Yves Guillemot could get on a stage somewhere, yell "Yeah we're doin' it!" and then forget the whole thing until April. We'd all be happy with that.

It's possible that this is related to the Splinter Cell VR game that was rumored back in July: VR Focus reported yesterday that Ubisoft is assembling a team for an unannounced VR project based on "one of Ubisoft's great IPs." Interestingly, the listings say the studio is "working on brands like Anno, Tom Clancy’s Rainbow Six Siege, Far Cry, James Cameron's Avatar, Beyond Good and Evil 2, Ubisoft Escape Games, [and] The Settlers," but makes no mention of Splinter Cell. A bit of strategic misdirection? It would be the Sam Fisher way, after all.