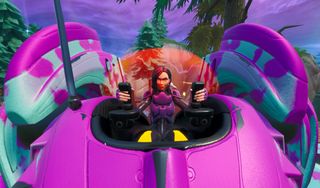 After stolidly weathering weeks of complaints from Fortnite's most vocal players and pros, Epic has finally rolled out a serious set of nerfs to the B.R.U.T.E. mechs introduced at the beginning of Season X. Mechs will now spawn less frequently, and their rocket damage and area of effect has been reined in, along with some additional changes.

Fortnite pros and big-name streamers have hated the mechs since day one, complaining that they're too difficult to counter with massive damage output and high health pools, and they make splinters out of any defensive build. Up until now, Epic has mostly stood by the B.R.U.T.E., explaining that it's meant to give newer, less-skilled players a way to even up the odds against practiced veterans. Epic also said the mechs have been responsible for a relatively small amount of kills, but complaints have persisted (despite James Davenport's level-headed defense of the bots earlier this month).

So what's changed? Epic has explained their reasoning for each of the balance changes they've made for the B.R.U.T.E., but the overall effect is to make the mechs less consistently lethal and mobile.

The number of rockets fired in a single salvo has been reduced from 10 to six, and those six rockets now fire 56 percent slower. Rockets' area of effect has shrunk by 42 percent. Epic says the idea here is to give players on foot more of a chance to react to B.R.U.T.E. attacks, while maintaining the mechs' effectiveness against structures.

To make the mechs easier to hit at long ranges, Epic has increased their dash ability cooldown from three to five seconds, and cut down the velocity they pick up from boosting in air by a third. B.R.U.T.E. pilots will no longer automatically pick up materials from stomping on structures, so players will have to hop out of the mech in order to stock up.

Epic had reduced mech spawn rates in Arena and Tournament playlists already, but now they've reduced them across the board. Up until now, the first two storm phases were guaranteed to spawn at least two B.R.U.T.E.s, and now there's at least a 25 percent chance each phase of none spawning at all.

It's not all nerfs for Fortnite's mechs with this update, though. The B.R.U.T.E. is getting a boost to its overall health, which goes from 1000 to 1250, and the materials cost for using the gunner's overshield has been reduced from 200 to 75.

For more details (such as the adjusted per-phase spawn rates), check out the patch notes.