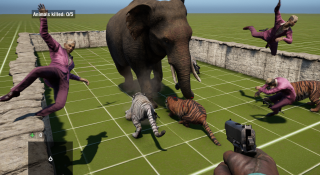 If you've played Far Cry 4 you've seen the ghostly orange tiger and smoky blue elephant leap at each other before exploding into the game's logo. This image of elephant vs. tiger is no doubt meant symbolically, to represent the two paths of skills available, the clash between durability and ferocity, the top and bottom buns of Ajay Ghale's murderburger, as it were, though this idea sort of falls apart because you'll probably unlock everything from both skillsets long before you finish the game.

I snag an elephant from outside Varshakt and hurriedly stampede it to the nearby tiger hunting ground, not stopping to accept a radiant hostage mission or to protect someone from being attacked by an eagle or even to avoid trampling a roving trader. I quickly spot a tiger and drive my 'phant over. While sitting on the elephant, the tiger refuses to fight, making him instantly smarter than 100% of Pagan Min's soldiers.

I climb off and try to goad the elephant and tiger into a brawl. The tiger is quite interested in attacking me, but when I try to get the elephant in between us, the tiger runs off and kills a tapir or an innocent human being instead. Frustrating! What's more, the elephant keep wandering away or going for a swim in the nearby inlet. Granted, swimming elephants are very cute, but I clearly I need a more controlled environment for to get this rumble humming. To the map editor!

Spawning a tiger and elephant on the dreamatorium-like grid results in much the same situation as in the game: they avoid each other and maybe the tiger tries to eat my face. An arena must be built! Here, they'll have no way to escape each other, and I can stand on a wall and watch like some kind of horrid and abusive animal fight promoter. Unfortunately, when activated, the tiger simply coils and growls, and the elephant stands impassively. Adding a second tiger doubles both the growling and the fighting, but since there's zero fighting, and doubling zero is still zero, there is still zero fighting.

This is where a smarter man would quit or think up a new topic or do a gallery piece on PC Gaming's Ten Deadliest Animals Of All Time, which someone will probably actually make me do now that I've mentioned it. Unfortunately, I am not a smarter man. Plus I spent, like, three whole minutes building my arena. I am not going to give up so easily or wisely. I throw in more tigers. There's more harmless growling, even when the elephant strolls calmly through them.

Maybe they need some bait? I throw a steak in, but it's ignored. Maybe they need some live bait? I throw in Pagan Min himself, whose tacky suit should serve to enrage even the most passive of creatures. The elephant quickly kills Pagan while the tigers continue to growl. I remove the elephant, just to see if the tigers are broken or something. The tigers quickly kill Pagan Min, then fight each other, then eventually kill a couple monkeys I also added.

I perform a few more experiments. My findings are as follows:

Still, no joy on the elephant vs. tiger front. Put an elephant anywhere near a tiger and the tiger just crouches and hisses uselessly, like my own cat when someone slams a car door anywhere on my street. I lengthen the arena to give everyone a little more room, so now tigers will immediately attack each other instead of simply growling, but they still won't attack the distant elephant. I add more Pagan Mins because I like the way he dies, especially when there are many of him dying at once and his dying takes the form of him flying through the air.

Finally, I simply fill the arena with every land-based animal on the list and a bunch of Pagan Mins, including one standing on the elephant's back. I recorded it, for you and for science. In the (very noisy) video below, Pagan Min meets a terrible fate a number of times, the rhino somehow escapes, the eagle shockingly decides to attack nothing for the first time in eagle history, and the turtle wants none of it. The tiger, as usual, simply growls.

At about 1:10, however, the magic finally happens.

Okay, yes, the tiger was probably leaping at something else, and the elephant was facing in the complete opposite direction. I'm calling it a win anyway.

(No animals were harmed in the making of that video. Seriously. Somehow, the final score is 0/21 animals killed.)