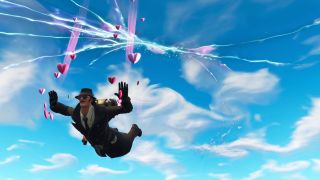 Though the items have yet to be formally announced by Epic, Fortnite: Battle Royale Leaks has shared a list of items that were uncovered in a datamine of the latest update, including assets called Disco, Bubbles, Stars & Stripes, TP, Glitchin’, Vines, Retro Scifi, Golden Starfish, and Ice.

Here are some new Contrails, most likely coming to the Season 5 Battle Pass...Here are the actual in-game names in order from the picture.- Stars & Stripes- TP (not decided)- Glitchin'- Vines- Golden Starfish (unknown)- Ice pic.twitter.com/TLKlIsjSzIJuly 2, 2018

While the items alone don't offer up much else about what's in store for Season 5, players have been speculating on what these trials might be. TP may be shorthand for Toilet Paper, and Glitching could perhaps show your character glitching around the sky as you hurl downwards, maybe?

In other news, Fortnite's missing Durr Burger mascot was recently found in the middle of a desert. Some players suspect that Durr Burger's new home in the desert indicates we'll be getting a new desert map, while others think it's just part of the marketing leading to Season 5 discovered a bit too early.

Fortnite is out now on iOS, Nintendo Switch, PC, Mac, PlayStation 4, and Xbox One. If you're still hankering for all things Fortnite, here's everything we know about Fortnite Season 5 right now. Not long to go now...