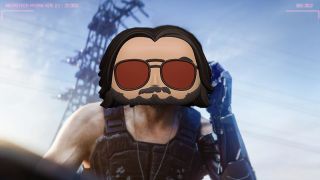 With Cyberpunk 2077 now delayed until September, the only thing we're getting in April is a new line of Funko Pops based on the male and female versions of V, as well as two different versions of Keanu's Johnny Silverhand. They will invade your nightmares and never leave.

It's really hard to pick between them. Which one is the most revolting? Keanu's hair and beard makes his Funko Pop's hideous head look even more monstrous, so I guess he wins the award for least breathtaking toy. Get a good look at God's mistakes below.

While they're more than twice as expensive, I'm more partial to the McFarlane Toys range, which includes 7" posable action figures and a big 12" Johnny Silverhand going wild on his guitar. Unfortunately, only the male version of V is available. They're also due out this spring.

Will any of these be gracing your shelves?