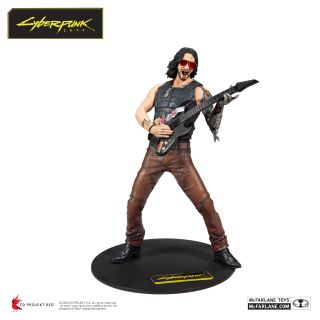 McFarlane Toys has announced a set of Cyberpunk 2077 action figures to release this spring, one of the protagonist V and three of Keanu Reeves. So, there you go, you can now own Keanu Reeves dressed up as a reboot of the coolest character from a tabletop RPG from the 80s. You can actually have three of those and put them on your desk in a neat little row of Keanus Reeves. There’s also a figure of game protagonist V in generic Male form, specifically the version featured on the game box that nobody will play as because they’ll all customize the character. The toys will be on sale at GameStop and Walmart sometime this spring. Presumably in time for the game itself. Here's the listings on their website. Here’s details on the figures: