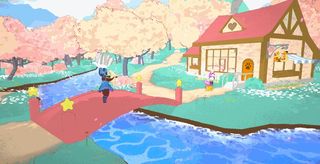 On top of a mountain in a forest full of pink trees, I've found a cat witch named Autumn whose housecat has run off. He should be easy to find, right? His name is Char and he has a black coat and bright green eyes, she tells me. Except in Calico, the magical girl cat cafe game inspired by the mechanics of Animal Crossing and the aesthetic of Sailor Moon, the island is crawling with housecats of all colors.

I walk outside of Autumn's potion shop to the small mountaintop yard contained in what looks like a glass succulent terrarium. Out front, still waiting for me, is a calico-patterned house cat the size of a car. It's my mount, of course, because what would a magical girl like me ride around town but an oversized housecat? There's also a broom parked outside my cafe but I only try it for a moment before realizing that my giant cat is much more fun. Mounted on my cat, I leap from the mountaintop to the forest floor below.

I dismount when I spot a black cat on the path ahead, sprinting over to get a look at his eyes. They look green to me, so I pull out a cat toy and use it to lead the suspect back up to his magical girl. Only, it isn't Charr. Autumn doesn't seem to care when I plop this black cat with maybe green eyes on her shop floor. So I'm back on the hunt, picking up and inspecting every black cat I spot like a cute old grandma squeezing peaches at the grocery store. Before long I pick up a black cat and turn the camera to look at it in the face. Now those are bright green eyes.

Autumn is grateful when I bring Char back to her shop and rewards me with a new piece of furniture. I sprint back to my cafe to redecorate. Fortunately, for the demo I'm playing at PAX West, my cafe is already quite well-furnished. I enter the decorating mode and move a few pieces of furniture around my bedroom to accommodate my new piece, just to put my mark on the place.

Finding Char and rearranging the cafe's furniture are the only activities in this build of Calico, but CatBean Games' creative director "Kells" shares with me some of the small team's plans for Calico now that it's successfully raised more than twice its crowdfunding goal.

As with all town sim games, Calico opens with you inheriting a space to call your own in a new place, Kells tells me. Your magical aunt retires to the beach and the cafe is left to you, the newly budding magical girl—or any gender, as apparently Calico's character creator will allow you to choose your body type and pronouns. You'll spend time helping the other magical folks of the five-pointed star island while making treats for your cafe and recruiting adorable animals friends to inhabit it.

Calico's star-shaped island will be divided into five areas: the mountains, a city (inspired by Seattle), flower field, deep forest, and magical forest. Each area will have different furry (and some not furry) creatures to befriend and recruit. Wolves, for instance, will be found in the mountains. You'll spend time finding these new friends and wooing them with treats. The magical forest is what Kells describes as the "endgame content" of Calico, harboring creatures that she says are the only thing which may qualify as spoilers for the game. I'll avoid spoiling them for you, but I can confirm there are some quite cool cats in store.

Back in the cafe you'll be able to decorate your space and your pastries as well. Cakes and macaroons and other baked goods can be painted on and colored before you display them in your shop, though Kells says that Calico will not judge your artistic talent like Animal Crossing judges your letters.

From what I've played so far and what Kells relayed to me at the Indie Minibooth at PAX, Calico doesn’t feel like most games. You can't lose. The cafe won't go bankrupt and close if you're a terrible owner. Your animals won't die or run away if you don't properly care for them. Instead, it's more like an interactive doll house. Calico is a pastel pink and unapologetically feminine canvas for decorating your life, your pastries, and petting every single cute creature you find.

Calico is planned for release sometime in 2020 for release on Steam, though it doesn't yet have a store page for wishlisting. You can keep up with Calico instead on Twitter or its Kickstarter page.