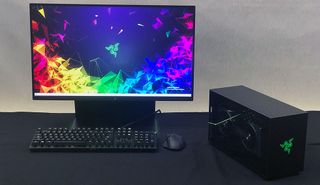 Razer is attempting to "redefine compact gaming systems" with the Tomahawk, a modular desktop PC purpose-built for Intel's NUC 9 Extreme Kit (or Ghost Canyon NUC, if you prefer). What's intriguing about the Tomahawk is the prospect of being able to assemble a gaming PC in very short order. As in, under a minute.

"A perfect fit for the Intel NUC 9 Extreme Compute Element, the Razer Tomahawk N1 is a sleek, compact desktop chassis with an advanced modular layout, infusing Razer’s minimalistic design language into a gaming chassis to create a one-of-a-kind desktop case, capable of achieving high clock speeds and framerates without the bulk of a full-sized desktop," Razer explains.

Razer calling this a modular design immediately elicits memories of Project Christine, the ambitious modular gaming PC concept it announced at CES in 2014. Perhaps way ahead of its time, Project Christine still remains nothing more than a concept and a page on Razer's website splattered with renders, not actual product shots.

To be clear, Tomahawk is not an updated version of Project Christine, nor does it exist only as a set of renders. On its own, Tomahawk is a glorified case for Intel's fancy new NUC. But that's selling it short. Razer tells The Verge it will offer it as a full turnkey system in June starting at $2,300 with a Core i7 processor, 16GB of RAM, GeForce RTX 20-series GPU, and a 512GB SSD.

It will also be available as a standalone product with support for up to a Core i9 processor, 64GB of RAM, and a GeForce RTX 2080 Super graphics card. Save for the graphics card, the core components will come by way of a NUC in all configurations, hence why it's so quick and easy to build a PC around a Tomahawk desktop.

When I say quick, I mean much faster than building a traditional PC. The folks at Gizmodo demonstrated assembling a fully configured Tomahawk in around 30 seconds. There is not much to it, since the NUC 9 Extreme is almost an entire PC in and of itself. All a user has to do is select a NUC, choose a GPU, plug both into the Tomahawk's PCI Express slots, and plug in the power cables. After that, the assembly slides into the Tomahawk's aluminum chassis and the build is complete.

That's about as easy as it gets to build a PC. There are trade offs, of course, such as limited component selection and not much in the way of visual customization. And who knows what cooling is like. On top of it all, pricing is another potential roadblock—$2,300 and up is a tough ask.

Ultimately I think it ends up being a niche product, though for someone who might be hesitant to build a full-fledged desktop from a pile of parts, the Tomahawk offers a compromise between doing that or diving into prebuilt waters. How well it's received, though, we'll have to wait and see.