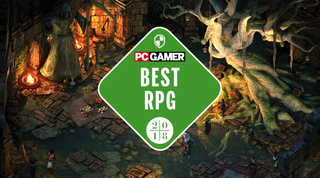 Our best RPG of 2018 award goes to Obsidian's Pillars of Eternity 2. It got fewer nominations than the other winners this year, but the staff members who voted for it made it clear how passionate they are about the game. Don't forget to check out the rest of our GOTY picks and personal picks as they happen.

Andy K: In terms of writing, quest design, and world-building, Obsidian is at the top of its game in Deadfire. This nautical sequel continues the story established in the first Pillars, but is standalone enough that you can dive into it without any prior knowledge. And what a grand adventure it is, making you a ship captain and letting you sail the deadly, alluring waters of the tropical Deadfire Archipelago. For the most part this is a classic Infinity Engine-style RPG, with reams of vivid, descriptive text, enchanted items with lengthy descriptions, dungeon diving, and magical beasts. But being able to crew and maintain a ship, and sail freely between islands, gives it a compelling seafaring twist.

Compared to the green and leafy Dyrwood, the relatively familiar fantasy setting of the original game, the Deadfire is a beguiling, strange, alien place, and uncovering its well-realised culture, politics, and history makes spending time there a delight. There are dozens of rounded, interesting characters to meet on your journey, quests that start small then spiral into something wild and unexpected, and a whole lot of deep, tactical combat to indulge in. The standout moment has to be Fort Deadlight, which sees you setting some amusing Hitman-inspired traps to get revenge on a villainous pirate.

Steven: What I love the most about Deadfire isn't the excellent story, characters, and writing, but how smart Obsidian has gotten at being able to distill all that information in a way that doesn't require me to keep a lore wiki open in the background. Pillars of Eternity was an intimidating game to get into, in part because it front-loaded every bit of dialogue with proper nouns and slang that I didn't understand. Deadfire does the same, but handy tooltips give you useful bits of context when you need them, so I'm spending less time rifling through a journal and more time enjoying what's happening on screen.

Fraser: Pillars of Eternity was a fantastic CRPG that managed to be a lot more than nostalgia fodder, but it still generally stayed within the lines, with the Infinity Engine games serving as a cornerstone. Deadfire is bolder. Sure, the systems are familiar, but the setting, tone and absurdly broad roleplaying options help it escape the shadow of Baldur’s Gate 2 and the rest of the gang. It’s a freewheeling pirate adventure, a sometimes unsettling story about colonialism and conquest, and even when it delves into the familiar fantasy realm of gods and prophecy, it always leaves the door open to something unexpected.

I felt like I was playing with a DM rather than just playing through adventures written by people miles away months and possibly years ago. From the get-go, I had a character in mind, and Obsidian let me play him without any concessions. It felt like genuine roleplaying; I wasn’t just picking the closest out of a couple of options. It realised, for instance, that there might be several good reasons for me, a foul pirate, to do a seemingly nice things and noble quests, giving me appropriate choices for a shitty person. I never had to stomach any dissonance just to experience a quest.