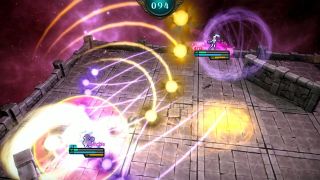 Here’s a unique game: Ballistic Craft, a bullet hell where you design your own magical weapons using a customizable system. Players in Ballistic Craft are rival wizards using customizable magic “Shots” to blow each other up in new and creative ways. Ballistic Craft is due to release on Steam on February 13. It has a singleplayer RPG mode, called “Quest Mode,” which slowly unlocks new types of shots for you to use, and lets you then break down those shots into their individual components to design your own attacks. It's also due to have PvP modes, which I’m sure will be utterly absurd as people try to out-think and out-maneuver each other. Given that these are the gifs provided by the developer, I expect the fan community to develop some pretty insane gifs pretty fast:

Ballistic Craft is from Japanese developers PalladiumSoft, who have very little English web presence. It’s published on Steam by GameTomo, who also did Project Nimbus. You can find Ballistic Craft on Steam. There's also a trailer: