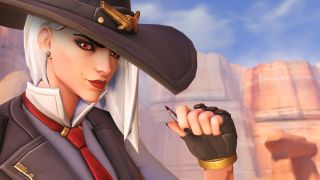 If you're having trouble reliably landing headshots on mouse and keyboard, a little training can go a long way. Whether it's Overwatch, Apex Legends, or any other of the best FPS games on PC, improving your skills with aim training is the clearest way to rank up and win more games.

Obviously, practice makes perfect. The more shooters you play, the better you'll get. For some tips to speed up the process, I reached out to former professional Overwatch player Rémy "Adetonian" Cabresin.

Improving your FPS aim isn't just about skill. It's about establishing good shooter habits, breaking bad ones, learning how to practice, and paying attention to how you hold your mouse.

Get your gear right

First things first: your skill is only as good as your gear can handle, and the two most important pieces of hardware when it comes to aiming are your mouse and mousepad. Luckily, mouse sensor technology has advanced to the point that you can get an accurate rodent without breaking the bank. Things to consider include DPI capabilities, weight, and button layout. We, and the pro players we've talked to, generally recommend simpler, lighter mice. For shooters, you likely only need one or two thumb buttons for core abilities, and a lighter mouse is easier to quickly whip around the mousepad.

You also want the lowest possible response time, as you won't be able to land headshots if your mouse is slower than your reflexes. And there is a difference between the responsiveness of different mice, as we've written about in the past. We think these are the best gaming mice, but the right one for you still needs to fit your hand just right.

The next thing you want is a good mouse pad. Adetonian recommends getting the largest mousepad that can fit on your desk, as you don't want to have to pick up your mouse in the middle of a firefight. This is mostly a concern for players who use very low DPI settings, which require much larger hand movements to move the cursor.

Once your hardware is in a good place, you want to make sure that your body is too. Some gamers claim that the way you hold your mouse can affect your performance (claw, palm, and fingertip grip are the three most commonly discussed), but Adetonian says the most important thing is to do whatever feels most comfortable. There are a lot of questionable infographics out there, but this mostly comes down to the size of your hand and how it fits the mouse you use.

"What's more important is the general ergonomics of your setup," he said. "If you slouch because you're tired, it'll impact your playing. You also want to more sure there's plenty of room for your wrists."

Mouse sensitivity is the single most important setting when it comes to FPS aiming. But there's no silver bullet of magical settings that will automatically make you a better shot. It's all about finding the settings that feel most natural while also giving you full control.

As we debunked in our list of gaming mouse myths, higher DPI on your mouse is not always better. Some mice will actually perform worse at their highest DPI settings, and a DPI in the settings will translate minute physical movements into huge, hard-to-control cursor movements. It can also be confusing deciding what DPI setting to use in your mouse's driver software and what sensitivity setting to use in a game. In general, it's best to pick a DPI you're comfortable with in Windows, then hone in on the right aim feel in-game. You also want to make sure that mouse acceleration is turned off, as that'll make precise aiming movements much harder.

A low sensitivity setting gives you more control to perform precise movements, but also requires you to control your mouse more at the elbow than at the wrist. Adetonian says it's good to start in the 400-800 DPI range, and then adjust sensitivity as needed. (On a large high-res monitor, you may find a DPI setting in the 1000s more suitable to Windows.) Here's what the difference between a low and high sensitivity can look like.

Moving from one end of the mousepad to the other, with 400 DPI:

Here's an important point: don't get too aggressive with your sensitivity adjustments. Adetonian says not to immediately change your settings when you have a single bad game—doing so will mess with your muscle memory. Instead, only look to changing your sensitivity if you have a consistent stretch of bad performance. Give an adjustment time to sink in before you decide it's not working.

There are two primary types of aiming: tracking and flick shots. Tracking refers to attempting to keep your crosshair aimed at your target at all times—useful for DPS characters with automatic weapons, like Overwatch's Soldier: 76 and Tracer.

Flickshots involve flicking your crosshairs at your target then returning to a neutral position—used for single-shot weapons, such as snipers or Overwatch's McCree.

Regardless of which type of character you're using, Adetonian recommends keeping your crosshairs pointed at wherever you expect to encounter an enemy. If you start every fight by having to react, you're more likely to miss your target or be too slow to hit them.

"When you're not in a fight, you want to hold your crosshair at the corner where you expect the opponent to come," Adetonian said. "When you go around a corner, snap your crosshair to the next corner in your path and keep it tracked there as you move up."

Once you've found a sensitivity that feels natural to you, it's time to work on your muscle memory. Flickshots, in particular, rely on muscle memory, but it comes into play in all parts of FPS play, whether it's moving around the map, spinning to hit an enemy behind you, or flicking to take out a fast-moving flanker.

"There are browser games you can play that people think will help improve their aim, but all they do is improve your reflexes—not train your aim," Adetonian said. This is because your in-game sensitivity doesn't translate one-to-one to your unaltered cursor movements in Windows, and thus the muscle memory for moving a certain distance isn't exactly the same.

A better plan is to practice your aim in-game. For tracking, aim your crosshair at a single point, then start moving. While strafing around—making the sorts of movements you would make during a firefight—keep your crosshair on that single spot. This trains your muscle memory, Adetonian says.

When you can easily keep your cursor motionless while strafing around, it's time to start practicing against a moving target. You need to be able to hit your targets while staying mobile, so continue strafing while keeping your crosshairs steadily locked on an opponent. Don't wait for them to enter your crosshairs. Your movements should be erratic and unpredictable—and your opponents' often will be too.

This is where custom games with bots come in handy. Setting the AI bots to hard will make them move at least somewhat realistically, but be sure to turn the damage modifier down as well. After all, you don't want to worry about getting mauled by AI bots when all you want to do is practice tracking moving targets. Here's my attempt at tracking the elusive Lúcio:

Overwatch custom games are great for flickshot training as well. Set up a game with six Ana bots on the other team and change the settings to headshots only. The hero Ana can't headshot, so she'll just strafe around the map, letting you practice your aim without risking death.

If your FPS of choice is, say, CS:GO instead of Overwatch, you can do similar practice in custom games. Aim training in CS:GO also means learning the unique spray patterns of every weapon. But in general, the training mentioned above will make you a steadier shot, and the important thing is to train in the game you really want to put these skills to use in.

Once you've developed muscle memory, you want to ensure it stays with you, even if you change games or transition to a new mouse or monitor resolution. The best way to do this is to measure the actual distance your mouse moves in order to turn your view 180 degrees in-game, and then adjust your settings in new games (or with new gear) until it matches up. Alternatively, see how far your character turns when moving your mouse from one end of your mousepad to the other.

With the new Overwatch Workshop custom game builder, there are new aim-training games you can play like this fantastic one from user PMAJellies.

Naturally, simply playing more FPS games will help you get better, but other resources include self-improvement subreddits such as r/OverwatchUniversity and r/LearnCSGO. Follow the above tips first, go on the hunt for some more advice suited to your favorite shooter, and you'll be headshotting your way to victory before you can say high noon.

Bo leads PC Gamer's hardware coverage, helping you better buy, understand, and use your PC hardware. You can usually find him playing Overwatch, Apex Legends, or more likely, with his cats.
See comments